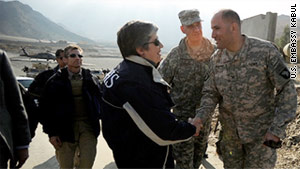 She reviewed security operations at a key point along the Pakistani border, part of an ongoing U.S. effort to strengthen Afghanistan's border police.

"Building and maintaining a strong border crossing system is critical to the stability and security of Afghanistan," Napolitano said in a written statement. "Over the past year, the Department of Homeland Security has worked closely with the Afghan government to help establish a border security and customs system to counter terrorism while facilitating legitimate travel and trade."

After her border visit, Napolitano had lunch with a group of U.S. and allied troops.

Napolitano is scheduled to meet with a number of senior U.S. and Afghan officials during her visit, part of a week-long trip that also includes stops in Qatar, Israel and Belgium.

Recent U.S.-led training efforts in Afghanistan have focused on stopping bulk cash smuggling and shipments of ammonium nitrate, according to a November statement released by the State Department.