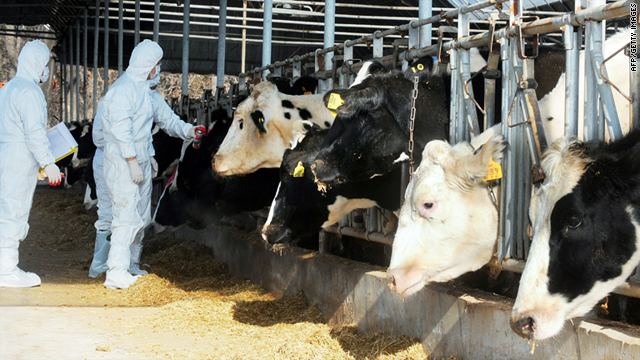 Seoul, South Korea (CNN) -- South Korea confirmed an outbreak of bird flu Friday as it struggles to contain foot-and-mouth disease, which has rapidly spread across the country.

A duck and a chicken have tested positive for the deadly bird flu virus, authorities said. The government has culled 119,000 birds and set up a quarantine zone around the affected farms.

Confirmation of the virus comes a day after officials announced they have raised the foot-and-mouth disease alert to its highest level.

More than 495,000 livestock have been culled -- slaughtered -- so far across 29 cities, with 60 confirmed cases of foot-and-mouth, according to the Ministry for Food, Agriculture and Fisheries.

The toll of affected livestock is at the country's highest level since 2002, when 160,000 were slaughtered, the ministry confirmed.

Livestock markets have been closed across the country while government oversees the vaccination of livestock.

"Prices are on the rise due to the shortage in supply caused by the restriction on cattle movement in the market," said Huh Duk, a researcher at the Korea Rural Economic Institute. "Prices go up anyway because of the end-of-the-year demand, but with the restrictions it adds to it."

Retail prices of a Hanwoo sirloin cut, Korea's quality beef, hit their peak in mid-December at roughly $34 for a half-kilogram (1.1 pounds), according to the Korea Agro Fisheries Trade Corp.

The government has set up a central disaster control center that will be led by the Ministry of Public Administration and Safety.

Foot-and-mouth disease first broke out in the country on November 28 on a pig farm in the southern city of Andong and has since spread to areas around Seoul in the northern part of the country.

The ministers of public administration and agriculture sought to reassure the public in a joint statement that foot-and-mouth disease does not spread to humans and said it is safe to continue eating meat.