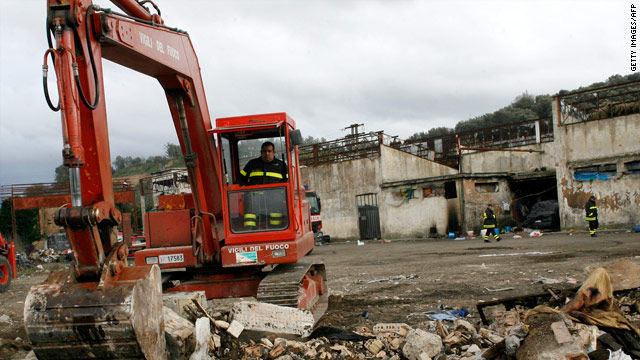 Firemen on Monday pull down a factory where immigrant workers were living in Rosarno, Italy.
STORY HIGHLIGHTS
RELATED TOPICS

(CNN) -- The message blaring out of the speakers on the van was stark: "Any black person who is hiding in Rosarno should get out. If we catch you, we will kill you."

He's one of hundreds -- perhaps thousands -- of African migrants taken by bus out of the Italian town over the weekend after violent demonstrations shook southern Italy.

The unrest was among the worst of its kind in recent Italian history, said a spokesman for the International Organization for Migration.

"We have not witnessed such protests in a long time," said Flavio Di Giacomo. "There were several thousand, but I don't know exactly how many people were involved."

Interior Minister Roberto Maroni got involved Friday, declaring an "immigration emergency" and forming a task force under the authority of regional police to guarantee public order.

It was the shooting of an African migrant that sparked two days of protests, Iddris told CNN by telephone from Italy. He said the shooting was unprovoked. Police said they were investigating the circumstances of the shooting.

Iddris lived with other migrants in an abandoned factory outside Rosarno, he said.

On Thursday, a BMW pulled up outside the factory, a man got out, shot one of the Africans living there, 26-year-old Ayiva Saibou, and drove off.

A passing policeman told Iddris and his friends it was not his job to help the wounded man, so they called the Red Cross to take the man to a hospital for treatment, Iddris said. Press reports said Saibou -- who is a native of Togo with regular working papers -- was shot with a compressed air gun.

A few hours after the shooting, a group of about 300 immigrants poured into to the street where the incident took place earlier. "They put on an angry demonstration, hampering the free circulation in the streets, damaging garbage bins, hitting with sticks and rocks numerous passing cars," according to a police report.

Iddris and his friends then decided to march to Rosarno's town hall to protest.

But police forced the demonstrators to turn back, threatening them with tear gas, Iddris said. Six or seven people were arrested, he said.

Police attempted talking with the immigrants, but negotiations did not produce positive results, according to a police statement.

The next morning, Friday, the immigrants tried again, playing drums as they tried to march from the factory to Rosarno's town hall, he said.

That's when they heard the warning.

"People took a van, an information van with speakers, saying any black person who is hiding in Rosarno should get out, if they catch anyone they will kill him," Iddris said.

Iddris -- who is originally from Sudan and has been in Italy for about 18 months, first as an asylum seeker and then without legal documentation, and who picks oranges in season -- said police arrested another 10 to 20 people at Friday's demonstration.

Later on Friday, Iddris said, police arranged for buses to move the Africans away from Rosarno to another village.

But the new location was no safer, he said. Police had to keep locals and migrants physically separated Saturday.

"They said they would take us to another place. They said it's dangerous now for blacks to stay there," he said.

Hundreds of people were driven north to Bari on Italy's east coast and Naples on its west coast, Iddris said. He was on one of six buses, each with 45 to 50 people, taken to Bari.

"Right now we don't know what is next," he said Monday.

Pope Benedict XVI spoke out against the violence in his weekly address on Sunday.

"An immigrant is a human being, different by background, culture and tradition, but a person to be respected," he said.

"Violence must never be a way to resolve difficulties," he said, urging people "to look at the face of the other and discover that he, too, has a soul, a story and a life. He is a person and God loves him just as He loves me."

Di Giacomo, the International Organization for Migration spokesman, said Italy has many migrants, often from Africa, living in conditions bordering on slavery.

The migrants who demonstrated last week "were exploited. They were just paid 20 euros (about $29) per day and they lived in slums, the same as slavery conditions. A few months ago in (the southern Italian region of) Campagna we discovered a similar situation. It's unfortunately a reality in many places, especially in southern Italy."

Italy is one of the top European destinations for migrants, the migration organization's figures show. More than 3.6 million legal migrants live in the country -- 6.2 percent of the total population -- and Italy has the European Union's highest annual growth rate of migrants, along with Spain.

It's hard to know exactly how many illegal immigrants there are in the country, Di Giacomo said.

"It is not controlled in any way. They change the area where they work because of the season of the year -- oranges in the winter, tomatoes in the summer," he said. "With economic migrants, many of them arrive with tourist visas and overstay seeking work. They can arrive in so many ways," including paying traffickers thousands of dollars to smuggle them into the country.

Not all the workers involved in the demonstrations were undocumented, he said -- but the line between legal and illegal can be porous.

"Some have lost their jobs, and in Italy if you lose your job you have six months to find work or you become illegal," he said.

Italian media have speculated that the Mafia was behind the shooting that triggered the violence.

But Di Giacomo said it was not important whether they were or not.

"We don't know if the Mafia is involved, but the point is not really the Mafia," he said. "The point is that the conditions for these migrants are so inhuman that they can lead to some violent reactions."