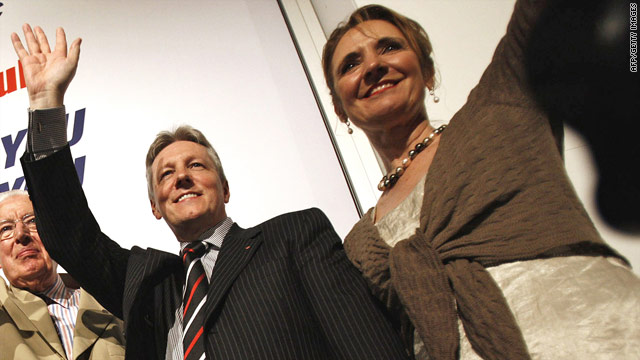 (CNN) -- Northern Ireland First Minister Peter Robinson will step down for six weeks in favor of a party colleague following a sex scandal involving his wife and amid allegations of irregular financial dealings.

Robinson has asked Democratic Unionist Party colleague Arlene Foster to carry out the functions of the first minister in his absence, he said in a statement.

Iris Robinson, also a top politician in the semi-autonomous British-run province, last week admitted having an affair with a 19-year-old and securing £50,000 ($80,000) from two businessmen to help him set up a cafe.

"As a father and a husband, I need to devote time to deal with family matters," he said.

Robinson also denied any knowledge of his wife's financial dealings and vowed to clear his name, saying he had called for a Parliamentary and Assembly inquiry into the matter.

"I continue to contend I have acted ethically and it is particularly painful at this time of great personal trauma that I have to defend myself from an unfounded and mischievous allegation," he said.

Addressing the Northern Ireland Assembly on Monday, enterprise minister Foster said she had discussed working arrangements with the offices of the first minister and the deputy first minister, a post held by Martin McGuinness of the republican Sinn Fein party in accordance with Northern Ireland's power-sharing agreement.

Robinson would be "seeking to clear his name in the days that lie ahead," she added.

Senior unionist politicians have expressed doubts about Robinson's prospects of political survival, with elections also due for parliament in London later this year. If he falls, the post of first minister and deputy first minister, held by Martin McGuinness of the republican Sinn Fein party, would have to be filled.

McGuinness can end his partnership with Robinson or refuse to be renominated if the East Belfast lawmaker is toppled.

The scandal has been exposed amid a tense backdrop in Northern Ireland. Republicans want more policing powers devolved from London to Belfast as their price for staying in government but the two main parties have failed to agree a deal on this.

In a statement issued Sunday, Sinn Fein President Gerry Adams said the Irish republican party was determined to see "beyond the current difficulties" and accused the DUP of failing to fulfil its political commitments.

"This is not about the Robinson's private family matters," Adams said. "Sinn Fein respect their right to privacy. It is about implementing outstanding political agreements that are essential to good government and public confidence."

Writing in the Times newspaper on Monday, Irish political expert Paul Bew said: "The brutal fact is that we were heading for a dangerous political crisis in Northern Ireland even before the Robinson revelations.

"It is now very difficult indeed to see how it might be avoided," added Bew, a member of Britain's House of Lords. "We could now face a very hard landing indeed."

Robinson's predecessor as First Minister said Sunday his position was becoming untenable. David Trimble, who jointly won the Nobel Peace Prize in 1998 for his efforts to bring stability to Northern Ireland, predicted that Robinson would quit in the "next few days."

Fears are also high of an upsurge in violence in Northern Ireland, where three decades of unrest known as The Troubles left at least 3,500 people dead but was largely ended by the 1998 Good Friday Agreement.

Last year, two British soldiers and a policeman were killed in attacks claimed by dissident republicans. And last Friday a Roman Catholic police officer was wounded when a bomb exploded under his car.

Iris Robinson is a controversial figure in her own right. In 2008 she caused a storm by suggesting that homosexuals should seek psychiatric counselling.