By Hilary Whiteman, CNN, and Matt Knight, For CNN 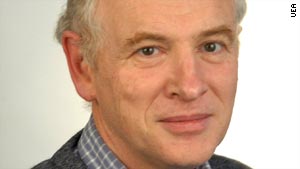 Phil Jones says he received death threats in the wake of the "climategate" scandal.
STORY HIGHLIGHTS

London, England (CNN) -- The UK scientist at the center of a controversy surrounding e-mails leaked from a leading UK climate research unit has admitted the strain of the affair led him to consider suicide.

In an interview with a British newspaper, Phil Jones, the former director of the Climatic Research Unit (CRU) at the University of East Anglia said he had thought about killing himself "several times" after receiving death threats in the wake of the "climategate" scandal.

"I was shocked. People said I should go and kill myself. They said that they knew where I lived. They were coming from all over the world," Jones told the The Sunday Times.

E-mails to and from Jones were among around 1,000 e-mails that made their way from East Anglia University onto the Internet last November. Jones has stepped aside while an inquiry examines the contents of the e-mails and how they came to be public knowledge.

Arguably more damaging than the initial e-mail leak to the cause for global warming, have been revelations since about the competence of the Intergovernmental Panel on Climate Change (IPCC), which is considered to be the leading authority on global warming data.

Last month, in an episode known as "glaciergate," IPCC chief Rajendra Pachauri was forced into a humiliating retreat on assertions made in the IPCC's Fourth Assessment Report (AR4) that the Himalayan glaciers would melt by 2035.

His admission that the forecast was not subject to vigorous examination not only provoked calls for his resignation, but raised questions about the reliability of the document's other predictions.

Reporting the latest allegations in British newspaper the The Sunday Telegraph, The Times of India referred to the newspaper's "campaign against Pachauri."

However, it was The Guardian newspaper in Britain that claimed to have made the first link between Pachauri and the East Anglia e-mails.

Last week, it alleged that Professor Phil Jones had tried to hide failings in temperature data gathered from Chinese weather stations that was later used by the IPCC.

The paper reported: "The apparent attempts to cover up problems with temperature data from the Chinese weather stations provide the first link between the email scandal and the UN's embattled climate science body, the Intergovernmental Panel on Climate Change, as a paper based on the measurements was used to bolster IPCC statements about rapid global warming in recent decades."

Jones was accused of failing to provide data on the location of weather stations in China which was considered crucial to the credibility of readings taken at those stations showing temperatures were increasing.

Despite a series of articles highlighting alleged errors in AR4, Pachauri has received high-profile backing, most recently from Indian Prime Minister Manmohan Singh.

On Friday, in his opening address at the Delhi Sustainable Development Summit, Singh called Pachauri's leadership of the IPCC "able" and "far-sighted."

It remains to be seen whether the IPCC is able to contain and manage the fallout of the recent allegations.

The impact of "climategate" and laterally "glaciergate" on the public's opinion on climate change is also uncertain.

Janet Swim, professor of psychology at Pennsylvania State University, says it is too early to tell.

"There have been shifts in belief about the climate, however, it isn't clear what role the e-mails have played in these shifts," Swim told CNN.

Either way, she says it will could take some time before public faith in climate scientists is restored.

"The accusation of unethical behavior, even if it is untrue, can create a stigma, or at least an uncertainty about whether the person can be trusted," she said.

Scientists, including Jones, have been at pains to point out that overwhelming evidence points towards man-made global warming.

"The work we do at the University of East Anglia is only a small part of [climate science], there's thousands of climate scientists around the world supporting our results," Jones told the Press Association last week.

"It makes me quite worried people are beginning to doubt the climate has warmed up," he added.

Last week an investigation by Pennsylvania State University into e-mails sent by the director of the Earth System Science Center, Michael Mann, found that only one of the four allegations against the scientist warranted further investigation.

The scientist is perhaps best known for his "hockey stick graph" which showed a rise in long-term temperature trends and was included in the IPCC's 3rd Assessment Report released in 2001.

The investigation will determine if Mann "engaged in, directly or indirectly, any actions that seriously deviated from accepted practices within the academic community for proposing, conducting or reporting research or other scholarly activities."

Mann told CNN the East Anglia e-mail leak was "intended as a distraction" from the Copenhagen Climate Conference but he said "the science [behind global warming] is solid."

Sir Muir Russell, the former vice-chancellor of Glasgow University, is heading an independent review into the East Anglia e-mails. His findings are expected to be released in March 2010.

For some, Jones' admission that he has considered suicide may have personalized the impact of the e-mail scandal. In some quarters though there is scant sympathy for the scientist accused of skewing the data to fit what some call a flawed theory.

On the Climategate Web site, which is dedicated to news about the scandal, one comment reads: "Welcome to the club, Phil. Now you know what people who run skeptic sites or conservative sites have to deal with. Quit your whining."