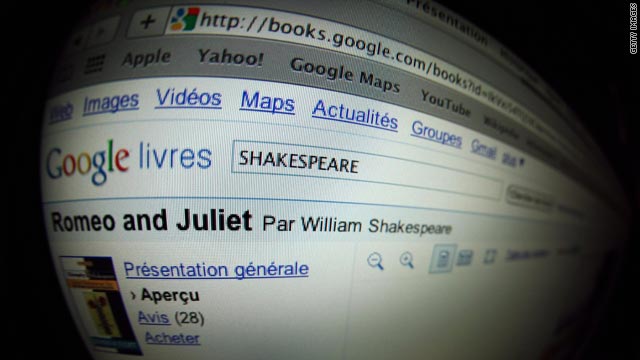 Many in France feel that Google Books should not profit from the content of its national archives.
STORY HIGHLIGHTS

London, England (CNN) -- A proposed partnership between the French government and Google is stoking fears in France that the country's literary treasures will fall under commercial control of a U.S. technology company.

Frederic Mitterand, the French minister of culture, has said that Google came to France with "the attitude of a conqueror" signing "unacceptable" and "one-sided" deals.

He told Le Monde newspaper that the deals involved "excessive confidentiality, impossible exclusivity and casual --even leonine --clauses on copyright."

For some, however, Mitterand's reaction is puzzling -- including one of the libraries concerned. Believing that access to their archives can promote French culture, the city of Lyon's library has signed an agreement with Google, hoping to scan as many as 500,000 books in 10 years.

The first text uploaded online was a rare 16th century collection of doomsday predictions from the French philosopher Nostradamus.

Under the Lyon Library contract, Google will scan its books and manuscripts for free. In exchange, the library gives Google the right to use the scanned documents commercially for the next 25 years.

"I find it normal and good that that book is scanned in Lyon where it was written. So I don't see the problem between using a method developed in the U.S. to promote heritage and culture in France or Europe. I don't understand the problem," Patrick Bazin, Director of the Lyon Library, told CNN.

By putting them on the Internet much larger circles of society can read these works.
--Patrick Bazin, Lyon Library Director
RELATED TOPICS

The library's collection includes national literary treasures and collectibles, such as a 16th century bible, in 12 languages.

That means security is a top concern and Google is therefore keeping the location of its scanning secret.

"By putting them on the Internet, much larger circles of society, including non-specialists, can read these works and enjoy them and find them useful," Bazin added.

"They are works that touch upon all sorts of subjects of life, of the universe," he continued.

At the national level, officials like Mitterand have expressed a strong preference to keep the digitizing an internal affair, and even develop a rival to Google. So far the government has earmarked $1 billion dollars to boost its own online database, known as Gallica.

However, in January, an independent review for the French culture ministry criticized the lack of progress made by Gallica, and recommended a public-private partnership with Google.

Since starting in 1997, Gallica has scanned less than one million documents and about 145,000 books, according to the UK's Financial Times newspaper.

At the same time, the report concluded that deals between Google and libraries around Europe were disproportionately favorable for Google, and a better distribution would need to be brokered without the exclusivity clauses for France.

Philippe Colombet, the head of Google Books in France, has said in the past that exclusivity was needed to guarantee a return on the investment of scanning, but that he welcomes a partnership with the state.

In a statement emailed to CNN, Colombet reiterated "Google's commitment to work more than ever in partnership with publishers and other actors in the book industry to help create a virtuous ecosystem for books in the digital era."

Currently Google has seven library partners in Europe, including Lyon. It is only scanning out-of-copyright works in Europe.

While the final details remain to be hammered out, the pace of Google's process makes it hard to eschew.

Google has already scanned more than 12 million books into its global index since the Google Books project launched at the Frankfurt Book Fair in 2004.