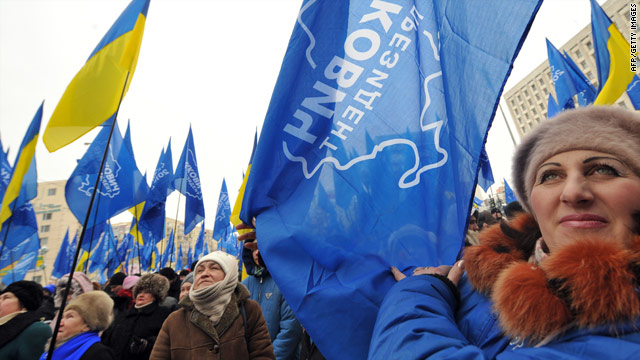 Meanwhile, her rival, former Ukrainian prime minister Victor Yanukovich told CNN it is time for her to give up.

Yanukovich is leading Sunday's runoff election. With 99.98 percent of the votes counted, he has 48.96 percent, while Tymoshenko has 45.47 percent, according to the country's Central Election Commission.

Yanukovich's supporters rallied outside the commission Tuesday and vowed not to leave until the vote count was final and their candidate named the winner, Ukrainian news agencies and state media reported.

In an exclusive interview with CNN Tuesday, Yanukovich called on Tymoshenko to accept defeat and remember the pro-Western Orange Revolution that swept her to power.

"This country has been democratic for five years, and that's been proven again by this election," he said. "Yulia Tymoshenko is betraying the principles of her Orange Revolution" by failing to acknowledge defeat.

A Yanukovich win would put the finishing touches on a remarkable comeback for the former prime minister five years after he was ousted in a populist uprising.

Ukrainian voter Nikolay Gluhovskiy said he supported Yanukovich because Tymoshenko had been a disappointment.

"All the time Yulia Tymoshenko has been in power, we had no prospects," he said at a Yanukovich rally Monday. "Of course, she is a fighter, but in a bad sense. She shouldn't have promised us so much and done nothing."

"Medvedev congratulated Yanukovich on the completion of the election campaign, which was highly rated by international observers, and the success achieved at the presidential election," the Kremlin's statement press statement said.

The Kremlin statement did not offer congratulations for a Yanukovich win, however.

During the 2004 presidential election, then-Russian President Vladimir Putin became the first world leader to congratulate Yanukovich on his victory, a full two days before the electoral commission declared him the winner.

Appearing on television after the polls closed Sunday night, Yanukovich said his opponent should begin preparations to step down.

But Tymoshenko has evidence of election fraud and intends to demand a recount in some districts where, she says, voting irregularities took place, officials from her party said Tuesday.

The two politicians have fought a bitter battle.

Yanukovich has strong links to Russia, and a checkered election history. In 2004, he was declared the winner of the presidential election before the ballot's legitimacy was questioned and he was accused of stealing the race.

"The country remembers times when there were presidents announced, they received congratulations, and then things changed," Tymoshenko said Sunday, referring to the 2004 race.

Yushchenko ran for a second term this year, but, blamed for Ukraine's faltering economy, he did not make the runoff.

This year's elections, by contrast to those in 2004, got a clean bill of health from the Organization for Security and Cooperation in Europe, which sent observers.

The OSCE hailed the process as "professional, transparent and honest," saying it should "serve as a solid foundation for a peaceful transition of power."