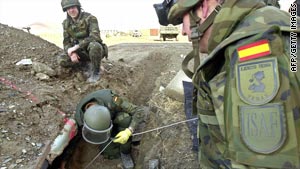 (CNN) -- The Spanish government will send up to 511 more troops to Afghanistan for the NATO-led security force, pending approval from parliament, the Defense Ministry said Friday.

The move was expected after Socialist government officials here recently discussed possible troop increases in response to requests, including from the Obama administration in the United States, for additional troops to fight the Taliban.

Defense Minister Carme Chacon is to appear next Wednesday before parliament's defense committee to formally request the troop increase.

Some of the additional Spanish troops would be focused on training Afghan troops and security forces to help them take over security of their own country, a ministry statement said.

Spain has had troops in Afghanistan since 2002 and more than 23 Spanish soldiers have died there, including a soldier last week. That soldier was killed when his military vehicle, on patrol, struck a mine. The blast wounded six other Spanish troops.