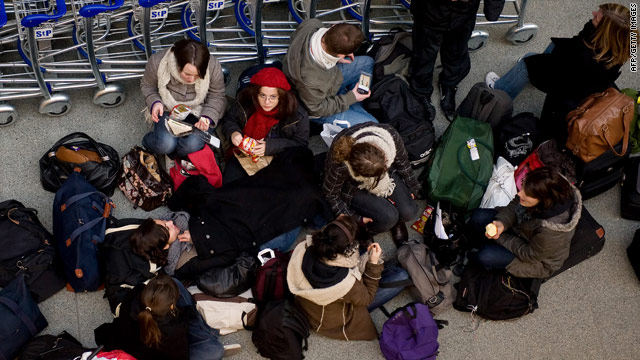 London, England (CNN) -- An independent report out Friday slammed Eurostar for the fiasco that saw thousands of passengers stranded before Christmas when winter weather hit the English Channel Tunnel.

The report said Eurostar, which runs the high-speed rail service between London and Paris, and Brussels via the tunnel, must make urgent improvements to train reliability, evacuation procedures and how it manages disruption.

Eurostar trains had not undergone sufficient winter preparations to withstand the conditions at the time, according to the 89-page report.

The train service later concluded that snow found its way into the power cars on the trains and shorted out the electronic systems, causing the trains to stop inside the tunnel.

The report also found that train managers did not give sufficient information to trapped passengers, and that Eurostar poorly handled delayed and evacuated passengers.

The problems started the night of Friday, December 18, when snow fell on both sides of the Channel Tunnel, also called the Chunnel. Five trains going from continental Europe to London broke down in quick succession inside the tunnel and a sixth broke down on the English side.

Eurostar canceled all services while it assessed the problems, stranding roughly 75,000 passengers on either side of the Channel on one of the busiest travel weekends of the year.

Some of the passengers on the failed trains had to be evacuated to other trains that took them out of the tunnel.

Passengers complained they were not told what was going on while they were stuck on the trains and once they got to the terminals. Some said they were left in the dark or in hot conditions, with no access to food or bathrooms.

Eurotunnel, which operates the Channel Tunnel, was not the focus of the report but came under criticism for how it evacuated passengers.

The report found "contingency plans for assisting passengers were insufficient" and that the provision of information to passengers -- at stations, on Eurostar's Web site and through the call center -- was unsatisfactory.

"Eurostar's and Eurotunnel's emergency procedures quite rightly deal with how to evacuate in the event of fire, or some other serious event, but do not satisfactorily address the potential need to evacuate a Eurostar train for other reasons such as the loss of air conditioning, lighting or other sanitation factors," the report says.

"For this reason, the review has recommended that Eurostar and Eurotunnel carry out an urgent review of their current procedures for evacuating a train in the event of power failure, particularly where air conditioning is lost."

Some of the worst problems were aboard the third train to enter the tunnel, known as the "Disney Train" because it travels to and from Disneyland Resort Paris.

The train departed for London at 7:37 p.m. and entered the tunnel at 10:08 p.m., filled with "tired children, tired parents," said Christopher Garrett, one of the report's two authors. It stopped in the tunnel and finally failed at 1 a.m., losing both air conditioning and power.

"Normally the batteries will provide some ventilation and some lighting but on this train, the train lost its air conditioning, lost its ventilation, and lost all its lighting and so the train was in darkness," Garrett told a news conference. "And although the lights are on in the tunnel outside, it doesn't give great light into the train itself.

"It is clear Eurostar did not have adequate emergency procedures in place.
--Report summary
RELATED TOPICS

"There was a very rapid rise in temperature. Families were having to literally strip babies down to nappies (diapers) and so on because the heat built up so a lot," he said.

Passengers were starting to get "extremely worried," with some suffering stress and panic attacks, and others feeling sick because of the heat, he said.

Three off-duty policeman and an off-duty paramedic volunteered to help out on board, he said.

Disney passengers were eventually transferred to a shuttle train to be taken back to the French side of the tunnel, but conditions on the shuttle were "appalling," Garrett said.

"It was cold and passengers reported that it was dirty," the report read. "All passengers, including pregnant women and small children, had to sit on greasy floors or to lean against the sides of the carriage."

Garrett highlighted the Disney passengers' experience because that one trip exposed many of the flaws seen aboard the other trains that broke down that night.

In addition to communicating poorly with the Disney passengers, some of the staff on board the train "locked themselves away because they were afraid of passenger unrest," the report said.

It recommends that train managers receive "special stress-management training, similar to that given to airline crews." The training "should teach them how to address, inform and reassure passengers during disruption and should be carried out in both English and French," the report said.

Train managers should wear high-visibility vests and catering crews should be trained how to evacuate passengers in an emergency, the report said, again indicating neither happened during the disruption.

The train managers should also broadcast safety briefings for passengers when a train stops in the tunnel and faces a long delay, the report said.

In situations where Eurostar trains lose their air conditioning, staff should open selected doors to help cool the trains, the report said. Eurostar should also review the battery life of emergency equipment and lighting, it said.

"It is clear Eurostar did not have adequate emergency procedures in place for managing major disruption to its services," the report said. "The review has therefore recommended it reviews and revises its procedures as a priority."

Eurostar had previously cited the difference between the winter air outside the tunnel and the warm air inside as being a factor in the problems, and the report confirmed it. Temperatures in the tunnel are warm and humid, often around 77 degrees Fahrenheit (25 degrees Celsius), the report said.

There is no doubt, the report said, that all five trains failed in the tunnel because "a large quantity of fine snow" entered the power cars of the train and were sucked through the ventilation system into the electronic control cabinets. The snow melted there and caused a "large number" of electronics failures, the report said.