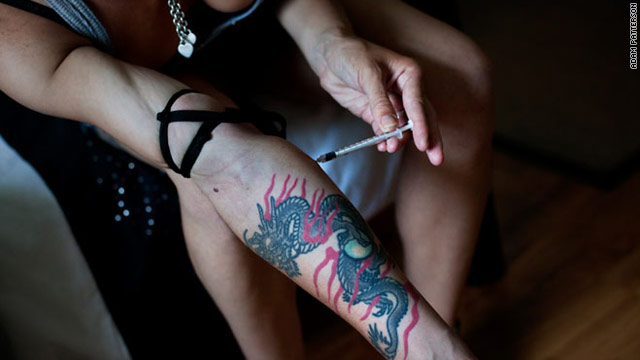 Editor's Note: The staff at CNN.com has recently been intrigued by the journalism of VICE, an independent media company and Web site based in Brooklyn, New York. VBS.TV is Vice's broadband television network. The reports, which are produced solely by VICE, reflect a very transparent approach to journalism, where viewers are taken along on every step of the reporting process. We believe this unique reporting approach is worthy of sharing with our CNN.com readers. Viewer discretion advised.

The latest one was made by myself and a young filmmaker called Leo Leigh. Leo's father is Mike Leigh, who's made films like "Naked," starring David Thewlis.

In spring of last year we discovered that the small South Wales city of Swansea had recorded an 180 percent rise in registered heroin users. This happened in just four years, with young people making up the bulk of the increase.

It used to be one of the biggest ports in the world, but when Margaret Thatcher helped bring about the end of heavy industry in Britain, the social implications for places like Swansea were dire.

Funnily enough, it was Thatcher who signed off on a program that meant heroin addicts would be given access to free, sterile needles. This was after she'd closed down the mines, docks, and factories. Mass unemployment and heroin addiction have always made fine bedfellows.

And so we went to Swansea and lived with a gang of young addicts for a few months and found out just why addiction to heroin in Britain continues to rise at such an alarming rate.

We found out about love, death, the organized sexual abuse of children and the collapse of the family. We stumbled into a race riot, met old sailors, and listened to a wonderful Welsh male choir. We learned about why dragging yourself out of addiction is such a struggle, especially if you're a teenager who's the product of two generations of heroin addicts and whose great-grandfathers were miners, sailors, and steelworkers.

Mainly, though, we filmed the young people from Swansea who make up the statistics about drug use in modern Britain.

The poor young souls in tattered clothes you cross the street to avoid? This film is all about them. We called it Swansea Love Story.