Analysis: What Greece tells us about Europe 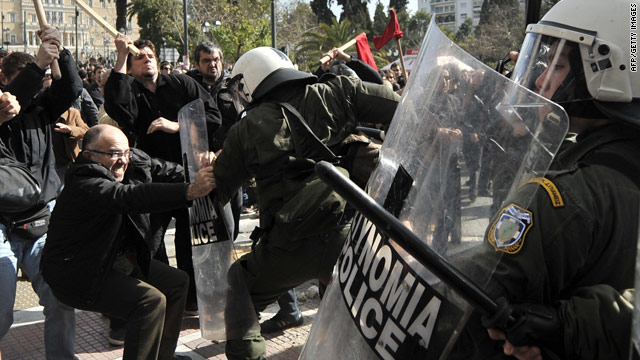 Protesters clash with riot police during a demonstration against the government's austerity plan in Athens on February 24, 2010.
STORY HIGHLIGHTS

Athens, Greece (CNN) -- The size and scale of the protests in Greece are hard to ignore. Athenians filled Constitution Square in the heart of the capital protesting the austerity measures being put forward by the government of George Papandreou. This is his first major test on the ground since taking office last autumn.

It is quite easy to be swept up into the strike action in Greece and the other labor protests we have been witnessing in Europe this week from the airline sector (Lufthansa and British Airways) to the energy sector (French giant Total), but it would be a mistake to see them as classic disputes over wages.

In Greece, Spain, Portugal and Italy protests go right to the heart of what many in the labor movement and broader society see as a birthright -- to continue to enjoy benefits that in today's globalized world are disappearing fast.

Taking Greece for example, investors saw the recent strike by Ministry of Finance workers as somewhat ironic since they are the very members of the civil service who are at the forefront of the restructuring plan itself.

It is not often discussed, but many government workers enjoy preferential tax rates, can retire at the age of 54 (in some cases earlier) and enjoy 14 months of pay for 12 months worked.

Video: Worker: 'No time to strike'

The Papandreou government is trying to reign in some of those policies, but as leader of the socialist movement Pasok those that brought him into power were not expecting changes to what they consider sacred covenants of their day-to-day existence.

In today's crisis, no one is really arguing about sacrifice, but how deep the pain will be. The strike is an effort to carve a line in the marble so to speak.

As this Greek drama plays out with huge consequences for the country's people and finances, there are many in Frankfurt, Paris and Brussels who are looking back at the brief history of the Euro and what led to this "Southern Med" crisis.

One of the key architects of European monetary union, former European Commission Jacques Delors saw the launch of the Euro as a path to deeper political union.

With a much bigger vision in mind, those who hurried this process along after the fall of communism and expansion of the European Union from 12 to 27 members overlooked or ignored both the generous entitlements and, worst still, the levels of corruption and tax avoidance that permeate these economies.

In December, Papandreou admitted to other European Union leaders that "systemic corruption" was at the heart of the Greek crisis and said his government intended to take "harsh measures" to root it out.

The Euro without contention has created both stability and wealth in Southern Europe. In the past decade citizens have been lulled into believing that a price won't have to be extracted for Europe turning a blind eye to the misdeeds.

As they take to the streets in protest, they are finding out that the lenient times are drawing to an end.