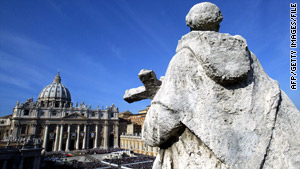 In addition to working for the government, the official involved in the scandal served as a papal usher for the Vatican.
STORY HIGHLIGHTS
RELATED TOPICS

Rome, Italy (CNN) -- A Nigerian man who sang in a Vatican choir arranged gay liaisons for an Italian government official who served in the unpaid role of papal usher, according to transcripts of wiretaps collected by Italian authorities.

The wiretaps were gathered as part of an investigation into how public-works contracts were awarded.

The purported conversations were between Angelo Balducci, who oversaw the Italian government's awarding of construction contracts -- including work on the airport at Perugia -- and Thomas Chinedu Ehiem, a 39-year-old Nigerian singer. They were recorded between April 14, 2008, and January 20, 2010.

In addition to working for the government, Balducci served as a "gentleman of his holiness," also known as a papal usher or "Vatican gentleman." The main responsibility of the ceremonial position is to welcome heads of state to the Vatican and escort them to see the Pope.

"It is shameful that things unrelated to the investigation are published," Coppi told reporters Wednesday outside the Rome prison where Balducci was confined. "We are thinking about taking legal action. During the interrogations, we did not discuss private matters."

Neither Balducci nor his attorney has commented on Eheim's interview with Panorama.