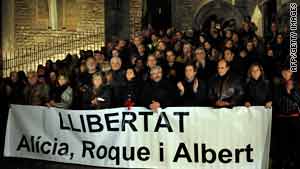 Fellow aid workers in Spain protest to demand the release of their three colleagues in December.
STORY HIGHLIGHTS
RELATED TOPICS

"I can confirm that, at last, the aid worker Alicia Gamez, kidnapped last November 29 in Mauritania, has been freed. The government will keep working without pause to free" the other two aid workers kidnapped with her, the deputy prime minister, Maria Teresa Fernandez de la Vega, told a nationally-televised news conference.

Gamez, 35, was traveling by plane to her hometown of Barcelona, accompanied by a relative and a senior Spanish government official, the deputy prime minister said.

No ransom was paid for the release of the aid worker, she added.

The aid workers are from the Barcelona Solidarity Action humanitarian organization. Their vehicle became separated from an aid convoy last November in Mauritania.

Their colleagues went back to find the vehicle, which was empty, with the doors open, and with tracks from another vehicle leading into the desert, Spanish officials said at the time.

Soon after, AQIM audio messages claiming responsibility for the kidnappings were issued on December 8 and 9. The al Qaeda messages said the three Spaniards were abducted about 170 kilometers (105 miles) north of Mauritania's capital, Nouakchott, near Nouadhibou.

Spanish officials said the three, including two men -- Albert Vilalta and Roque Pascual -- who are still being held, were later moved to Mali by their captors.

AQIM's messages last December said the three hostages were being treated in accordance with Islamic law, and it vowed to free "our detainees from your jails."

Spain is holding dozens of Islamic militant convicts or suspects, including 14 sentenced in the Madrid train bombings in 2004 that killed 191 people. Many others are on trial or await trial.

Spain enlisted the aid of Mauritania and Mali to help free the hostages, sending aircraft along with medicine for the hostages.

Vilalta was wounded in the leg by gunfire during the kidnapping, Spanish media reported, and the Spanish government later said he was "being treated for his injuries."

But Spain's deputy prime minister said the freed aid worker told her by telephone that the two aid workers still in captivity are currently "well and anxious to be free."