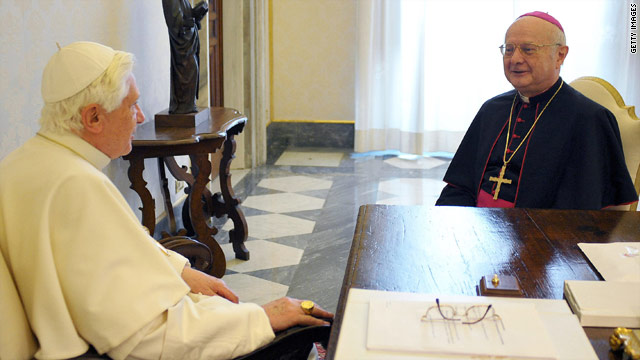 Freiburg Archbishop Robert Zollitsch, president of a conference of German bishops, discussed the scandal in a meeting with the pope Friday.

The archbishop said he did not believe that priests' celibacy caused the sexual-abuse problem.

The pope later reaffirmed his support for priestly celibacy as well, telling a separate group that "it is an expression of the gift of the self to God and to others."

Zollitsch's meeting with the pope unfolded against the backdrop of a growing scandal involving sex-abuse allegations in Catholic Church institutions in Germany.

Nearly every day since the end of January, people have come forward to report cases of sexual abuse by Catholic priests in the nation. News reports put the number of cases at about 170.

The scandal took a new turn Friday, when news broke that 30 years ago, Pope Benedict XVI -- who was an archbishop at the time -- approved providing a priest accused of child sex abuse church accommodations in his diocese so the priest could undergo therapy.

The German diocese of Munich and Freising said in a statement Friday that the man who is today the pope was involved in the decision.

The priest, who was not identified in the statement, was let go from church service in 2008, the statement said.

"I've already, a few weeks ago, asked for forgiveness to the victims and I would like to repeat it today," he said.

"We are ready to confront our responsibility, and we cannot be excused for what has happened," he said.

"It is not just a German problem," he said. "It is a problem that concerns many countries."

Zollitsch has addressed the issue before.

"Sexual abuse weighs extremely heavily in the context of the church because children and youth put so much trust in priests," he has said. "There must be no sexual abuse -- especially in the church."