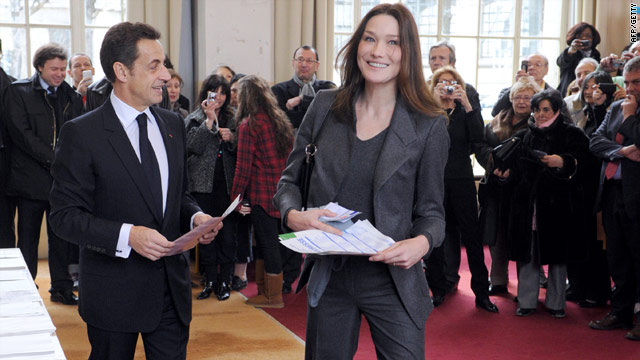 Sarkozy's UMP party took just over a quarter of the vote, putting it in second place behind the Socialist Party, which took 29 percent.

The far-right National Front took 11.5 percent, and the centrist MODEM party trailed in last with just over 4 percent. About 11 percent of ballots were invalid, blank or cast for smaller parties.

The Socialist Party could be positioned to sweep to power in 20 of France's 22 domestic regions in the second round of voting next week if the voting pattern repeats itself.

"The French people want to punish the governing powers," political analyst Roland Cayrol said. "Members of the governing right attribute this score to the abstentions but in reality, the success of the left is indisputable. There is also an evident force emerging from the greens, which sends a clear signal to the Socialist Party that they are not alone in the left spectrum."

But the biggest winner in the first round of the two-part election was "none of the above" -- turnout dropped below 50 percent for the first time ever, Interior Ministry figures show. Just over 46 percent of eligible voters cast ballots, down from about 60 percent in 2004, and well below the previous low of about 57 percent in 1998.

Sarkozy was elected president in 2007, beating Socialist Party candidate Segolene Royal with 53 percent of the vote to her 47 percent.

Sunday's elections were the first round of the vote to elect regional leaders and councils. Next Sunday voters will choose between the finalists from the first round in France's 22 domestic regions and four overseas territories.

CNN's Niki Cook in Paris contributed to this report