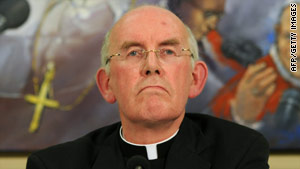 Cardinal Sean Brady has come under criticism for his part in an investigation into child abuse by a priest in 1975.
STORY HIGHLIGHTS

Brady's office said Tuesday that the cardinal, then a priest and teacher with a doctorate in canon law, had been asked to investigate two complaints against Smyth in 1975, but had no decision-making power. He reported his findings to Bishop Francis McKiernan, his office said, and McKiernan recommended Smyth get psychiatric help.

"He's basically using the Nuremberg defense, he was carrying out orders," Kelly said, in reference to the justification many Nazis used in their war crimes trials after World War II.

The Archdiocese of Munich and Freising said in a statement Monday it must have been clear at the time that the priest, whom multiple sources identified to CNN as Peter Hullermann, was coming to get therapy for allegedly molesting children. He was convicted of abuse in 1986, after Ratzinger moved to Rome. Hullermann was suspended on Monday.