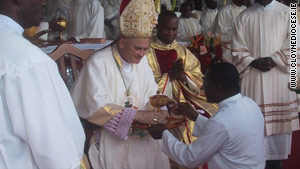 Bishop John Magee has apologized for any abuse that occurred in his diocese.
STORY HIGHLIGHTS

(CNN) -- An Irish bishop resigned amid a Catholic church sex abuse scandal, apologizing in a statement Wednesday for any abuse that occurred in his diocese.

Bishop John Magee of the diocese of Cloyne said he tendered his resignation to Pope Benedict XVI on March 9.

"I have been informed today that it has been accepted, and as I depart, I want to offer once again my sincere apologies to any person who has been abused by any priest of the Diocese of Cloyne during my time as bishop or at any time," Magee said in a statement posted on the diocese Web site.

"To those whom I have failed in any way, or through any omission of mine have made suffer, I beg forgiveness and pardon."

Child abuse by Catholic clergy in Ireland has become such a widespread scandal that the pope addressed it in an unprecedented pastoral letter to Irish Catholics.

Benedict said he was "truly sorry" for the abuse. The pope addressed the crisis that has rocked the Irish Catholic Church in an 18-page pastoral letter, which was made public Saturday.

Critics said the pope did not go far enough in the letter.

The acceptance of Magee's resignation came only days after the pope's letter was published.

The leader of Ireland's Roman Catholics, Cardinal Sean Brady, wished Magee well in a statement, but said he had to focus on the victims of abuse.

"Foremost in my thoughts in these days are those who have suffered abuse by clergy and those who feel angry and let down by the often inadequate response of leaders in the Church," said Brady, who has himself come under fire for failing to report what he learned during an investigation into a priest who became one of Ireland's most notorious child abusers.

Brady was part of an internal Church investigation into Father Brendan Smyth in 1975. He did not report his findings to the police and asked two teenagers who gave him evidence to sign oaths of secrecy.

In the past five years, Ireland's Catholic Church has had three separate outside investigations into child abuse -- both sexual and physical -- by priests, nuns, and staff at Catholic-run institutions such as schools and orphanages.

Four bishops tendered their resignations in the wake of the most recent, the Murphy Report, which found a widespread tendency to cover up child abuse in the archdiocese of Dublin between 1975 and 2004.

Only one of those resignations has been accepted -- that of Bishop Donal Murray on December 17.

The resignation of Bishop Magee is not related to any of the recent statutory reports, said Patsy McGarry, religious affairs correspondent for the Irish Times newspaper.

Instead, it is rooted in an internal church report on child protection practices in his Cloyne diocese in southern Ireland.

It found those to be "inadequate, and in some respects dangerous" in Cloyne diocese.

Its findings were published in December 2008, prompting calls for Magee to resign.

Magee did not resign, but he was effectively stripped of his authority in March 2009, when Archbishop Dermot Clifford of the neighboring diocese of Cashel and Emly was appointed "apostolic administrator" of Cloyne diocese.

The Murphy Commission -- which produced the report into the Dublin archdiocese -- is now investigating Cloyne diocese, McGarry said. It is expected to report later this year.

Magee, 73, had been bishop of Cloyne since March 1987, according to the Irish Catholic Bishops Conference. Bishops normally retire at 75.