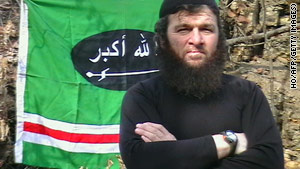 (CNN) -- Chechen rebel leader Dokku Umarov claimed that he personally gave orders to attack the Moscow subway this week, according to a Chechen rebel Web site.

Kavkaz Center, a Web site that regularly carries messages from the rebels, released a video in which Umarov said he was behind the Monday attacks.

The attacks were revenge for what Umarov called a "massacre conducted by the Russian occupants against the poorest residents of Chechnya and Ingushetia," the Web site says.

According to the site, the video was taped the same day as the attacks.

The incident Umarov referred to is a February special operation by Russian forces, after which there were accusations of Russians killing innocent civilians.

In the video, Umarov said the victims were simply gathering garlic to make a living.

According to Russian officials, at least four civilians were killed during the special operation near the Ingushetian village of Arshty on February 11. After investigating the incident, the officials admitted that it was "the season to collect wild garlic" and civilians may have been doing just that despite requests for "evacuation" from the area.

The president of Ingushetia, Yunus-Bek Evkurov expressed condolences to relatives of the deceased and provided material support in the amount of 50 thousand rubles (about $1,700) for each family.

The president noted that during the raid 18 militants were also killed.

The attacks in Moscow, in which two female suicide bombers killed at least 39 people and wounded more than 60 others, were legitimate retribution for what happened in Chechnya, Umarov said in the video. He also promised "new acts of vengeance" in Russia.

Russians will no longer be able to simply observe the battles in the Caucasus, Umarov said.

"Therefore, the war will come to your streets, and you will feel it for yourselves and with your own lives," he said in the video.

On Tuesday, Russian police released photographs of the two women suspected of carrying out the attacks.

They were hunting for a 30-year-old man from the Northern Caucasus who was seen on security cameras wearing dark clothes and a black baseball cap, and two women, aged 22 and 45, both ethnic Slavs, who allegedly assisted the man, state TV reported.