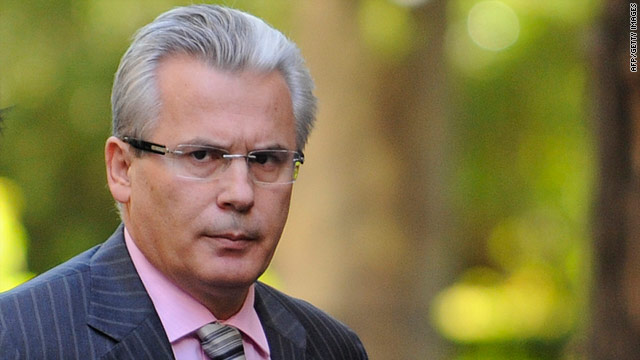 Garzon is accused of "trying to take control of locating and exhuming" mass graves dating from the Franco era.
STORY HIGHLIGHTS
RELATED TOPICS

Varela's 14-page order allows Garzon to appeal the call for a trial but also states that it is "probable" that Garzon committed the judicial abuse, which Varela said is sufficient legal ground to permit a trial.

No date was set for the potential trial.

Garzon could be removed from the bench if found guilty.

He became internationally well-known in October 1998, when Pinochet was arrested in London under orders from Garzon. Garzon was testing in Spain a legal concept called universal jurisdiction, which allows some serious crimes to be tried anywhere, regardless of where the alleged offenses occurred.

Under Pinochet's dictatorship, from 1974 to 1990, up to 30,000 people vanished -- they came to be known as "the disappeared" -- or were killed for their political beliefs. Many were students, labor leaders, intellectuals and others considered to be leftist insurgents.

The former dictator was held in England for 18 months while officials considered Spain's extradition request. British authorities ultimately decided Pinochet was too frail to stand trial, and he was allowed to go home.

A Chilean judge ruled in 2004 that Pinochet was healthy enough to stand trial on 300 charges and placed him under house arrest. Pinochet died in a Chilean military hospital in December 2006 at the age of 91.

Garzon also gained widespread attention in 2003 when he compiled a 692-page indictment that called for the arrest of bin Laden and 34 other men on charges that they belonged to a terrorist group. Six other defendants were added later.

Twenty-four suspects were tried in Madrid in 2005, and 18 were found guilty of belonging to an al Qaeda cell and sentenced to prison.

Garzon in 2008 began investigating human rights abuses under Franco, who ruled Spain for more than 35 years after winning the 1936-1939 civil war. Historians say there were thousands of forced disappearances.

But a conservative group, Manos Limpias (Clean Hands), soon lodged a complaint against Garzon, contending that the Spanish Parliament had granted to all involved in such crimes a blanket amnesty in 1977, two years after Franco's death.

The law came during Spain's transition to democracy, when political leaders wanted the country to move forward, without reopening old wounds.

A year before Garzon's investigation began, the Spanish Parliament, led by the current Socialist government, passed a law in 2007 condemning Franco's dictatorship and calling on town halls to fund initiatives to unearth mass graves.

The 2007 law also sought to honor Roman Catholic clergy and others executed by the losing side in the war, the forces loyal to the leftist Republican government.

In Wednesday's Supreme Court ruling, magistrate Varela wrote that Garzon, in his investigation, "tried to take control of locating and exhuming" the mass graves.

Garzon issued "multiple rulings which for multiple reasons are against judicial reasoning, and did so knowingly, eventually constituting an abuse of power," Varela wrote.

Garzon last month proclaimed his innocence in a brief statement to reporters. Spanish media reported that his defense lawyer is expected to appeal the latest ruling.

Emilio Silva, president of the Association for Recovery of Historical Memory, which has spearheaded the search for mass graves, told Spain's state radio that the latest ruling against Garzon "is a sad day for justice."

Garzon, a judge at the National Court, spent his early years investigating the Basque separatist group ETA -- blamed for more than 800 killings in its fight for Basque independence -- and also major drug traffickers.

He later tackled Islamic terrorist cells in Spain, and human rights abuses under former military regimes in Chile and Argentina.

Most recently, he also investigated a large case of alleged corruption and influence peddling that implicates some senior figures of the main opposition, the conservative Popular Party.