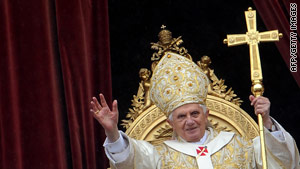 The Vatican rejects claims Pope Benedict XVI has been involved in attempts to cover up abuse cases.
STORY HIGHLIGHTS

Rome, Italy (CNN) -- The Vatican is overhauling its rules on how it handles accusations of sexual abuse by priests, it said Monday, without giving any details.

The powerful Catholic Church body that handles such allegations has been working on updating the 2001 rules "for some time," the Vatican said.

It published a new summary of its procedures on sexual abuse cases Monday, as it fights the perception that it has tried to hush up abuse in the past. The summary said the overhaul is taking place.

The church has been badly shaken by allegations of widespread child abuse by clergy in deeply Catholic Ireland, and hundreds of people who say they were abused have come forward in Germany, Austria and the Netherlands.

The Vatican says the letters in question, about a Wisconsin priest accused of molesting hundreds of deaf boys over two decades, were not written to Rome until long after the abuse took place.

The one-page document published Monday outlines the official steps diocese should take if a priest is accused of abuse, how to escalate complaints to Rome, and possible punishments for those found guilty.

It does not appear to contain new guidance -- only to consolidate existing practices into one document.

The summary, produced by the Congregation for the Doctrine of the Faith, says local diocese "investigate every allegation of sexual abuse of a minor by a cleric."

If the allegation "has a semblance of truth," the local diocese refers it to the Congregation for the Doctrine of the Faith.

Local diocese should also report the allegations to the appropriate civil authorities if local law requires, the guidelines say.

The pope was head of the Congregation of the Doctrine of the Faith, as Cardinal Joseph Ratzinger, before being enthroned as Benedict XVI in 2005.