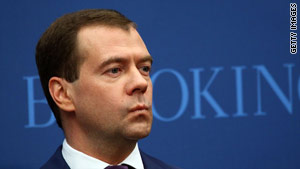 Russian President Dmitry Medvedev said Tuesday that nuclear terrorism "is a threat to all of us."
STORY HIGHLIGHTS

Medvedev said he does not support crippling sanctions that can hurt the people of Iran, "but if nothing happens, we will have to use sanctions."

The Russian president made his remarks during a question-and-answer session after a wide-ranging and, at times, humorous speech at the Brookings Institution, a prestigious Washington think tank. The address came at the end of a two-day summit on nuclear security hosted by President Obama.

Sanctions, Medvedev said, should be "smart" and "universal," aimed at one result, and should be discussed with the main countries that will take part in them.

The Russian president described the nuclear summit as a "complete success" and said nuclear terrorism "is a threat to all of us."

Asked what the next steps on non-proliferation should be, Medvedev said "more work" and ratification of the START arms control agreement, which he signed with Obama in Prague, Czech Republic, last week.

"It would mean Obama and I did not work in vain," he said.

The two presidents, he said, had agreed that ratification of the START treaty in the U.S. Senate and in the Russian Duma should be "simultaneous." The next 10 years, he said, will be peaceful, as long as "things contained in the agreement's preamble" do not happen.

"We worked out a statement that the treaty will be in effect as long as anti-ballistic-missile principles will not contradict the principle of the treaty," he explained.

Russia continues to oppose U.S. plans for a missile defense shield that Moscow claims would make Russia vulnerable to attack.

Asked his opinion on the recent political violence in the former Soviet Republic of Kyrgystan, in which the president was pushed from power, Medvedev said he believes "it is on the verge of a civil war."

'We don't want it to turn into a failed state," he said. "If it happens, it will attract terrorists and create the basis for radical movements." The task now, he said, is to help Kyrgystan to "form a viable government motivated by the interests of the Kyrgyz people."

The 44-year-old president drew laughs from the audience of Russia experts and politicians as he described his tech-savvy relationship with the 48-year-old American president. He said that statesmen can "become slaves" to the information provided to them by their aides. By using the Internet, he said, whatever he and Obama read, they can check out online.

"It's a very important advance," he said, "it's an alternative source of information."

He said Obama and he "don't e-mail each other" but added "maybe that would be a good idea. We could exchange e-mails or text messages," which he said would be faster and more direct.

"I don't have a perfect picture of what is going on so it's useful," he added. He said he started a blog on his Web site "and now the governors are doing it." He said bureaucrats used to be scared of criticism from superiors; now, they're frightened by comments on Web sites.

In a strikingly candid comment, Medvedev said Russia is overly dependent on raw materials, and if the worldwide economic crisis had not happened, "we would be living on inertia."

"I'm happy the crisis happened," he said. It was bad that the economy fell and people lost jobs, he explained, but "it should change our mindset -- but so far it hasn't changed." He said ordinary Russians are waiting for oil prices to rise again "but the problem is this is top-down development."

He said the main challenge is to develop other areas of the Russian economy like technology, atomic energy, pharmaceuticals and energy efficiency.