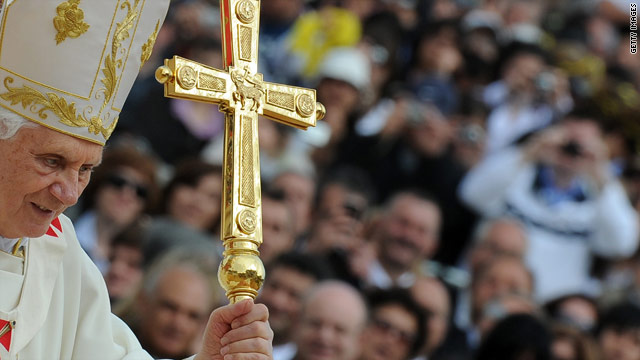 Valletta, Malta (CNN) -- Pope Benedict XVI told a group of sexual abuse victims Sunday that he feels "shame" for what they suffered within the church and will make sure their abusers are brought "to justice," the Vatican announced.

One of the victims, Joseph Margo, said the meeting was "very emotional" -- and left even the pope "with tears in his eyes."

On a trip to Malta, the pontiff met with eight men who said they were abused by Catholic priests when they were children, the Vatican said. The group prayed together, and then the pope spoke individually with each of the men.

"He was deeply moved by their stories and expressed his shame and sorrow over what victims and their families have suffered," the Vatican said in a statement.

"He prayed with them and assured them that the church is doing, and will continue to do, all in its power to investigate allegations, to bring to justice those responsible for abuse and to implement effective measures designed to safeguard young people in the future."

The pope also "prayed that all the victims of abuse would experience healing and reconciliation, enabling them to move forward with renewed hope," the Vatican said.

The eight men are among a group of 10 on the Mediterranean island who have come forward saying Catholic priests abused them at a local orphanage during the 1980s and 1990s.

Joseph Margo said Sunday's encounter with the pontiff had a strong impact. "I made peace with the Church," Magro said immediately after the meeting.

The 20-minute encounter, held in the chapel of the papal embassy in Malta, was only Benedict's third meeting with victims of sexual abuse -- and the first amid the recent chorus of criticism of the church's response to the crisis and of Benedict's own history of handling sexual abuse cases.

The pontiff met with five victims of sexual abuse in Washington during his April 2008 trip to the United States, and with five other victims in July 2008 in Australia.

The Maltese crisis has rocked this tiny island nation of some 400,000, which is 94 percent Catholic, in part because one victim has linked the abuse he suffered at the orphanage to a horrific crime he committed in 1991, murdering a homosexual man. Gaetano Scerri -- who recently completed a 20-year prison sentence -- told a newspaper that "the abuse, the rapes and the beatings" made him "a pitiless person, full of rage." Scerri did not take part in Sunday's meeting.

Benedict made no public reference to the sexual abuse scandal during his brief two-day trip to Malta, aside from a brief remark aboard the papal plane from Rome that the church is "wounded by our sins." A papal spokesperson later characterized the remark as a "discreet reference" to the sexual abuse crisis.

Tens of thousands of people attended an open-air Mass in the capital of Valletta, but the pope did not address the issue in his homily.

The private meeting with victims was "intense" but "serene," according to the Rev. Federico Lombardi, Vatican spokesman.

While the victims who took part in the meeting were generally hopeful about its significance, the largest organization for victims of priestly sex abuse in the United States was more skeptical.

"We are sure these brave men deserve anything that can help their healing and we hope they feel better," said Barbara Dorris of the Survivors' Network of those Abused by Priests.

"However, the pope's professions of 'sorrow' don't keep one child-molesting cleric away from kids, expose one corrupt bishop or make one child more secure," Dorris said. "That is where the pope's focus should be."

After the encounters in 2008, the initial reaction from the victims was largely positive. Over time, however, some have argued that whatever momentum they generated has been squandered by the church's failure to adopt sweeping policy changes to weed out predator priests and to hold bishops accountable who failed to stop the abuse.

Recently, two of the victims who met Benedict XVI in Washington in 2008 announced plans to stage a large gathering of victims in St. Peter's Square in Rome in late October, calling it a "Day of Reform" to demand the Vatican adopt tough new policies on abuse.

The Malta stop was the first of five international trips the pope has planned this year.