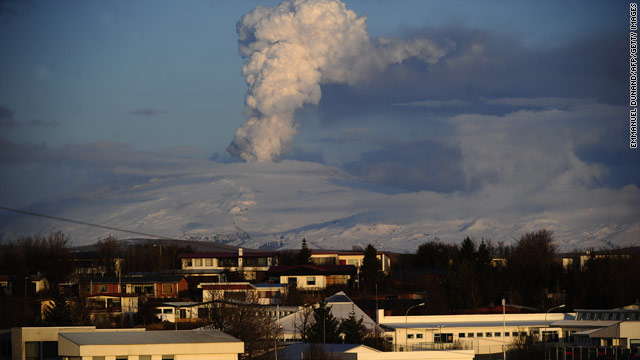 A volcanic ash cloud towers over Hella, Iceland on Thursday. Some Icelandic airports will close for the first time due to the ash.
STORY HIGHLIGHTS

(CNN) -- Iceland will close two airports on Friday for the first time, a week after ash from an Icelandic volcano forced the shutdown of airspace over much of Europe and stranded thousands of passengers around the world, the Icelandic aviation authority announced Thursday.

Though the ash cloud originated in Iceland, the country's airports have been spared from closure until now. Strong northwest winds had been blowing ash from the volcano, in the south of Iceland, out to sea and over Europe.

"Now the winds have died down, and the cloud is lingering around Iceland," said Chris Almond, a forecaster with Britain's Met Office, the nation's national weather service.

Two other Icelandic international airports, in Akureyri and Egilsstadir, will stay open to all air traffic, the aviation authority said. The ash cloud is not expected to reach those cities, which are in the north and east of the island nation.

Icelandair announced Thursday that trans-Atlantic passengers from the U.S. and Europe who would have stopped in Keflavik will be rerouted Friday via Glasgow, Scotland.

Icelandair said that passengers traveling to and from Iceland will have the option of being re-routed through the Akureyri airport, a four-hour drive from Reykjavík. The airline is arranging bus travel between Akureyri airport and the Reykjavík Bus Terminal.

But the cloud still caused flight disruptions Thursday. The British Ministry of Defence temporarily suspended non-essential flying Thursday after volcanic ash was found on some of its Typhoon fast jets.

The crisis began after the volcano beneath the Eyjafjallajokull glacier erupted April 14 and sent a cloud of ash into the atmosphere. By the next day that cloud had reached Europe, where authorities quickly closed the airspace over safety fears.

By Tuesday, however, airlines had started to complain that the measures were too restrictive. Ash levels in most parts of Europe, they said, were low enough to allow the safe operation of flights.

Scientists in Iceland said Wednesday the volcano has decreased its ash output by 80 percent compared to the first day of eruption.

"Airspace was being closed based on theoretical models, not on facts," said Giovanni Bisignani, director general and CEO of International Air Transport Association. "Test flights by our members showed that the models were wrong."