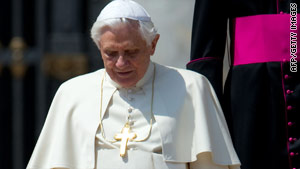 Five Irish bishops have submitted their resignations to the pope since December.
STORY HIGHLIGHTS
RELATED TOPICS

Bishop Jim Moriarty offered his resignation in December amid criticism after the publication of the Murphy report on clerical sex abuse in the Dublin Archdiocese.

"The decision to offer my resignation was the most difficult decision of my ministry," Moriarty said in a statement.

Before he was named bishop of Kildare and Leighlin in 2002, Moriarty served as auxiliary bishop of Dublin for 11 years.

"I did not anticipate resigning when I first read the Murphy report, because I was not directly criticized," Moriarty said. "However, the Murphy report covers far more than what individual bishops did or did not do. Renewal must begin with accepting responsibility for the past."

Moriarty apologized and said he should have challenged the prevailing culture while auxiliary bishop.

Ireland has been rocked by a series of child abuse reports, both physical and sexual, by Catholic clergy going back at least seven decades.

Five Irish bishops have submitted their resignations since December. Three, including Moriarty, have been accepted.

Meanwhile, a German bishop accused of child abuse has offered to quit.

Walter Mixa, the bishop of Augsburg, asked for "forgiveness" from "all those to whom I have done an injustice and all those I have saddened" in a statement.

Mixa has been accused of hitting children in his care and misusing funds donated to a local orphanage, according to the German TV station Deutsche Welle.

Pope Benedict XVI did not immediately respond to the offer.