By Matt Knight, for CNN 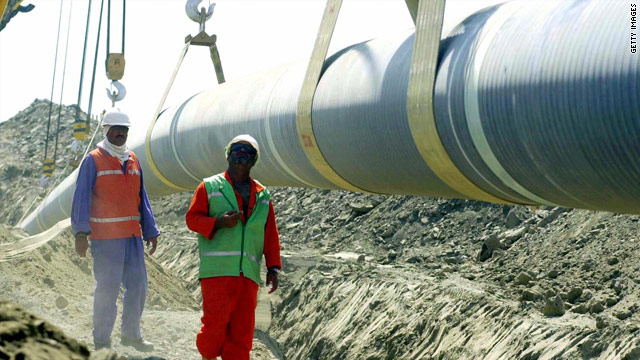 The Baku-Tbilisi-Ceyhan pipeline provides the West with a secure energy supply pumping up to one million barrels of oil per day.
STORY HIGHLIGHTS

(CNN) -- Linking Europe with the oil reserves of the Caspian Sea, the Baku-Tbilisi-Ceyhan (BTC) pipeline was one of the largest engineering projects ever undertaken in the region.

Traversing three countries, the BTC pipeline is nearly 1,800 kilometers (1,100 miles) long -- one of the world's longest -- and feeds oil from the Azeri and Chirag fields beneath the Caspian Sea all the way to the eastern coast of the Mediterranean.

The pipeline begins in Azerbaijan's capital, Baku, snakes up past Georgian capital Tbilisi, before crossing into Turkey and finishing at Ceyhan, a port town in the south of the country.

Conceived in the 1990s and built between 2003 and 2005 -- at a cost of $4 billion -- the BTC pipeline turned on its pumps in May 2005. One year later the first gallons of high quality crude were being pumped onto supertankers docked on the Turkish coast.

Running at full capacity, the pipeline can pump the equivalent of one million barrels of oil per day.

The BTC pipeline is owned by a consortium of energy companies with UK energy company BP -- which also operates the pipeline -- owning a 30 percent stake. Azerbaijan Limited is the next biggest shareholder with 25 percent.

Its construction received the enthusiastic support of the United States government and from western nations, who welcomed the opportunity to reduce dependence on the Middle East and Russia for oil supply.

The BTC pipeline's output is comparatively small (it provides just one percent of the world's oil requirements) and passes through areas of strategic importance which were previously controlled by the former Soviet Union.

Despite having to cross rivers and scale mountains -- reaching a height of 2,800 meters through the Caucasus Mountains -- the line is buried underground. But this hasn't stopped concerns over terrorist attacks, and as a result its route is patrolled by armed guards.

A section of the pipeline in Turkey was attacked in August 2008, for which the separatist group Kurdish Workers Party (PKK) claimed responsibility, according to a report from Turkey's Cihan agency.

Environmentalists were also deeply opposed to the pipeline, which burrows under wilderness including an area around Georgia's Borjomi-Kharagauli National Park -- one of Europe's largest.

The BTC pipeline inspired part of the plot of the 1999 James Bond film "The World Is Not Enough" where the "King pipeline" -- constructed between the Caspian Sea and Turkey -- is threatened with attack. It was also the subject of the 2009 book "Pipe Dreams" by photographer Rena Effendi which chronicles the lives of the people who live next to the pipeline.

For Georgia, which is home to 250 kilometers (155 miles) of the pipe, the economic benefits are huge. When it opened in 2005, it was estimated that it would earn the country $62.5 million in transit fees every year, according to a report by the Central Asia-Caucasus Institute & Silk Road Studies Program, a transatlantic research and policy think tank.

Politically, the BTC pipeline is a potent symbol of Georgia's increasing ties with the West -- some have called it Georgia's umbilical cord to Europe -- and also its growing sense of identity since independence in 1991.

According to the CIA World Factbook, Georgia imports "nearly all its needed supplies of natural gas and oil products." It was once reliant on Russia for most of its gas supplies, but now imports both oil and gas from neighboring Azerbaijan.

Georgia also has a sizable hydroelectric capacity and in recent years the government, supported by the World Bank, commissioned a review of the country's energy requirements.

The study has recommended the construction of three hydro power plants, including reviving plans for the Khudoni Plant on the Inguri River which started in 1979 but stopped a decade later due to political uncertainty.

The World Bank's annual "Doing Business" report recognized Georgia as the world's fastest-reforming economy in 2007 and remained "one of the stellar performers for simplifying business regulations, easing tax burdens and increasing access to credit" according to the 2008 report.

Fifty-five percent of its total two million workforce are employed in agriculture, while 35 percent now work in the service industry, according to the CIA World Factbook.

Georgia's main exports are metal and ores, aircraft, wine and nuts. The country's biggest trading partners include Turkey, the U.S., Ukraine and Azerbaijan.