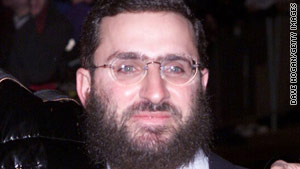 (CNN) -- A rabbi walks into St. Peter's Square, meets the pope, and tells the Holy Father that one way to defuse the sex abuse scandal plaguing the church is for the Vatican to begin promoting a secular version of Shabbat dinner, the traditional Jewish Friday meal.

A prominent American rabbi, Shmuley Boteach, spoke briefly to Pope Benedict XVI on Wednesday about encouraging parents to eat dinner with their children as a way for the Vatican to re-establish its pro-family image, which has been battered by the priest sex abuse scandal, Boteach said.

The brief exchange came after the pope's regular Wednesday address at the Vatican, during which Boteach was seated on a dais along with other Vatican guests. When he met Benedict on a receiving line afterward, Boteach pitched him on his family dinner initiative, called "Turn Friday Night into Family Night."

"I said ... 'If the church embraces an initiative like this, which is positive, it could put a lot of the scandal behind it,'" Boteach said, recounting his chat with the pope. "People will see the church doesn't just speak about opposition to gay marriage and abortion.'"

"The church is now perceived as not being a champion of families because the scandal has hit with so much force," Boteach said. "I came (to the Vatican) as a friend and as someone who is critical as well. Because my criticism is real, the church knows my friendship is real."

Following his talk with the pope, Boteach said he was invited to meet with Cardinal Walter Kasper, who spearheads the Vatican's Jewish outreach, with whom Boteach fleshed out his criticism of the church's response to priestly sex abuse.

Boteach was invited to the Vatican to look over documents related to Pope Pius XII, the Holocaust-era church leader who Benedict has signaled he would like to move closer to sainthood.

The rabbi has been a spiritual adviser to Michael Jackson, who died last year, and a frequent guest on Oprah Winfrey's talk show.

A number of recent Vatican actions have caused tensions between the church and the Jewish world. Last year, Benedict lifted the excommunication of a Holocaust-denying bishop, Richard Williamson.

Earlier this month, the pope's personal preacher compared the fury over sexual abuse within the church to anti-Semitism, though the priest, the Rev. Raniero Cantalamessa, later apologized.

But Boteach has been impressed by the Vatican's overtures to him and to other Jewish leaders. "I thinks he's a friend to the Jews -- a very close friend," Boteach said of the pope.

Boteach said that the Vatican had shown him documents from its private archive showing that Pius XII, a controversial figure among Jews, rescued Italian Jews during the Holocaust. But Boteach remains critical of Pius, saying he displayed "absolute silence in condemning the Nazi Holocaust outright, which might have gone to great lengths to prevent it."

The church has said that Pius would have put more Jews in danger by publicly condemning the Holocaust because it would have provoked the Nazis.