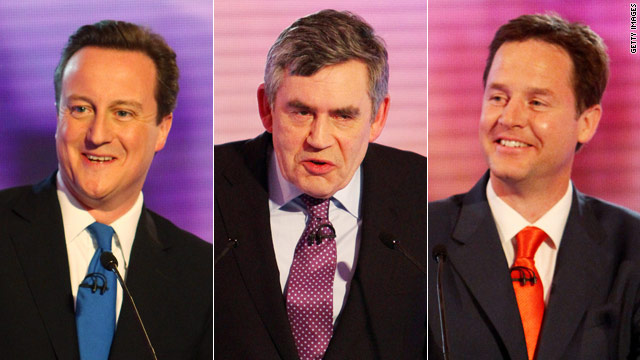 London, England (CNN) -- British Prime Minister Gordon Brown fought to hold on to his job Thursday in a debate against the two men who hope to replace him, David Cameron of the Conservative Party and Nick Clegg of the Liberal Democrats.

But he lost the debate decisively, according to two snap polls.

Cameron came first in both polls, with Clegg second and Brown third.

But the debate performances do not seem to have changed voters' minds about whom to back, according to one poll.

Just over a third of voters say they favor the Conservatives, and the same number back the Liberal Democrats, according to the poll by ComRes for ITV News. Just under one-quarter prefer Labour, the poll suggests.

Those numbers are essentially unchanged from the results after a similar debate last week.

In this week's debate, Brown repeatedly insisted that Cameron represents "the same old Conservative party," which would take money out of the economy for "ideological reasons."

The Conservatives are ahead of Brown's Labour party in most polls, but it's not clear that the lead will be enough to give them a majority when voters cast ballots on May 6.

A confident-seeming Cameron fended off Brown's attacks, saying time and again that Brown was wrong on the facts.

"David, you've just got it wrong economically," Brown said in one of the sharpest exchange, saying his party was "the same old Conservative party of the 1930s and the 1980s and the 1990s."

"Every leading business leader says we have got it right," Cameron shot back.

They crossed swords again about unemployment, with Brown warning "we don't want the labor market of the 1980s," when the Conservatives were in power. "It's the same old Tories."

Cameron fired back that Brown doesn't "even know what country you're prime minister of -- he's caused record youth unemployment."

Brown continually shook his head as Cameron leveled criticism at the Labour Party, while Cameron tended to stare ahead into the studio audience when he came under attack.

Clegg, whose Liberal Democrats are traditionally also-rans but are riding high on the back of their leader's debate performances, struggled to appear relevant as the leaders of the two big parties traded barbs.

"The way they got us into this mess is not the way out," he said, gesturing to the politicians on either side of him.

The first half of the debate focused on the economy, one of the main concerns on voters' minds.

Members of the audience asked about government spending cuts, the fairness of the tax system, bankers' bonuses, and how to rebuild the British manufacturing sector.

The debate got even sharper in the second half when the hot-button issue of immigration came up.

Cameron accused the Liberal Democrats of wanting an "amnesty for illegal immigrants," while Clegg shot back that the only politician who wanted that was the Conservative mayor of London, Boris Johnson.

Voters across England, Scotland, Wales and Northern Ireland cast ballots for 650 members of Parliament on May 6. The party with the largest number of MPs traditionally gets the first chance to form the government.

Either Labour or the Conservatives usually gets an absolute majority, but polls suggest the Liberal Democrats may capture enough seats to prevent one party from having more than half of the seats in Parliament.

Quirks in the voting system mean that the party with the most votes does not always get the most seats.

The last time no party got a majority, in 1974, a new election was called within months.

Labour has been in power in Britain since 1997, first under Tony Blair, and under Brown since 2007. The Conservatives governed Britain for 18 years before that.