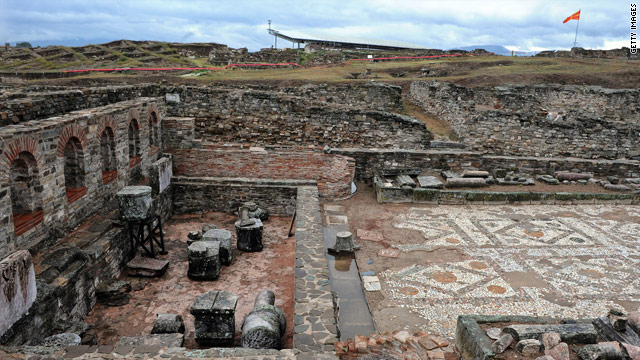 The famous mosaics of the ancient Roman archeological site of Stobi, in southeast Macedonia
STORY HIGHLIGHTS

About a quarter of its two million population lives in the capital Skopje, a city on the Vardar River that combines Communist-era tower blocks with an Ottoman-era Old Town and filled with evidence of its 2,500-year history under Roman, Byzantine, Ottoman and Yugoslav rule.

The raging river divides the Albanian and Macedonian communities of Skopje. Almost two-thirds of the country's population are Orthodox Christians and a third is Muslim, according to the CIA World Factbook.

As a result, the country has numerous monasteries, churches and mosques. It has ancient relics dating back 3,800 years. Lake Ohrid, one of the deepest and oldest lakes in Europe, was once surrounded by 365 churches, some dating from the 4th century.

Macedonia lies in a seismically active region and has several hot thermal baths. There are many mountains over 2,500m in the Shar Planina range. The Lonely Planet travel guide describes the country as a "paradise" for outdoor types with numerous opportunities for skiing, hiking and climbing.

Macedonia was the only country to emerge peacefully from the former Yugoslavia, but 19 years later it still has an international identity crisis over its name.

The reason for the controversy is a region in Greece that is also called Macedonia. International recognition of Macedonia's independence was delayed by Greek objections to the name. Greece eventually agreed to recognize the "former Yugoslav Republic of Macedonia" designation.

Macedonians do not like this name, and negotiations are continuing under the United Nations to find a solution, according to the British Foreign and Commonwealth Office.

In 2001, there was an uprising of ethnic Albanians -- who make up a quarter of the population -- demanding equal rights, leading to months of violence. Peace returned later the same year with a peacekeeping operation by NATO troops and a new constitution recognizing Albanian as an official language and increasing access for ethnic Albanians to public sector jobs, including the police force.

Official statistics show high unemployment at 35 percent, but this does not take into account the extensive informal job market, estimated to be more than 20 per cent of GDP, according to the CIA World Factbook.

Macedonia's president Gjorgje Ivanov came to power in elections in 2009. Prime Minister Nikola Gruevski was re-elected in 2008 after snap elections called when Greece blocked a NATO invitation to Macedonia over objections to the country's name.

The country is also a candidate for membership of the European Union.

Macedonians are proud of their wine and cuisine, which combines Balkan, Mediterranean and Turkish characteristics.