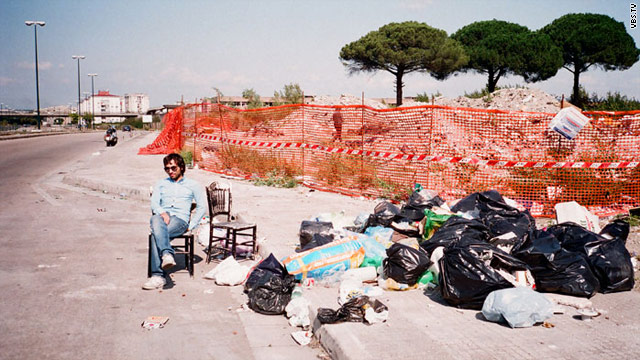 Editor's note: The staff at CNN.com has recently been intrigued by the journalism of VICE, an independent media company and Web site based in Brooklyn, New York. VBS.TV is Vice's broadband television network. The reports, which are produced solely by VICE, reflect a very transparent approach to journalism, where viewers are taken along on every step of the reporting process. We believe this unique reporting approach is worthy of sharing with our CNN.com readers. Viewer discretion advised.

Brooklyn, New York (VBS.TV) -- Recently, VBS headed to Naples, the capital of the Campania region in southern Italy, to shoot two documentaries about the Camorra, the most powerful but least understood of the Italian crime cartels.

One piece was about the peculiar world of the Camorra's homegrown Neapolitan pop stars, known as Neomelodics. The other, excerpted here, focused on the environmental emergency brought on by the Camorra's manipulation of garbage disposal in the region. Each proved to be a strange and infuriating experience.

The daytime hours were spent visiting housing blocks where every family had reported at least one case of cancer because of illegal toxic waste dumps behind their homes. Our evenings, however, were spent at town square celebrations sponsored by the Camorra two blocks away and attended by the same families we had met earlier that day. The Camorra, it was suddenly clear, was dumping toxic waste in people's backyards and then hosting Neomelodic pop concerts in their front yards.

See the rest of Toxic: Napoli at VBS.TV

Today, the Camorra's Naples is Italy on steroids, and it's the result of a marriage of convenience between two powerful Italian forces. Neapolitans we met were, on the one hand, fed up with the garbage situation. On the other, very few had any interest in pointing fingers at the Camorra.

The Gerlando family is a prime example. On one of the last days of our shoot, we spent an afternoon with sheep farmers Patrizia and Mario Gerlando at their home in the Campanian countryside.

The Gerlandos were forced to leave their home in the town of Acerra (a suburb of Naples) because all of their sheep were mutating and dying due to the high levels of dioxin in the pastures where they grazed. Despite Acerra being the most well-documented case of the Camorra's involvement in Campania's environmental crisis, after the cameras were packed away, Mario and Patrizia told us that the Camorra had nothing to do with anything and that it would take someone like Prime Minister Silvio Berlusconi to come fix the situation.