Free and easy? One man's experiment in living without money 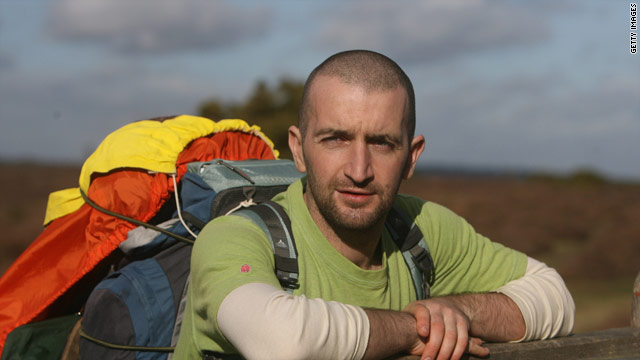 "Don't get rich quick! Ask me how!": Mark Boyle, "The Moneyless Man" began his finance-free existence in 2007.
STORY HIGHLIGHTS

(CNN) -- For most of us it seems that money makes the world go round.

But not for Mark Boyle, who has turned his life into a radical experiment and pledged to live without cash, credit cards, loans or any other form of finance.

The British economics graduate was inspired by Gandhi's call to be the change you want to see in the world. After six years working as the manager of an organic food company in Bristol, UK, he decided to strike out in a bold new direction.

"I was sitting around with a friend one night in 2007 discussing the world's problems, and we were trying to work out which one to dedicate our lives to helping solve," he told CNN.

"Then it hit me, at the root of it all was money, which creates a kind of disconnection between us and our actions, whether that's through sweatshops, industrial agriculture, or war, and so I decided to see if it was possible to do without."

It's about reducing your consumption, and there are lots of small ways people can do that which will benefit themselves and the environment.
--Mark Boyle, author, "The Moneyless Man"
RELATED TOPICS

Mark sold his houseboat and set about preparing himself for his new life. He posted an advert on Freecycle asking for a tent, a yurt, a caravan or any other type of shelter and was immediately rewarded by his first taste of human kindness.

"Asking for a caravan was just a joke, really, I didn't expect to get one," he says.

"But this woman had an old one she no longer needed and it was costing her to keep, and so she gave it to me."

At least he would have a roof over his head. The caravan was taken to the organic farm where he was to volunteer three days a week in return for space to live and grow his own vegetables.

Then a friend made him a cheap wood-burning stove from an old gas can to heat the caravan, and with a few other budget purchases, including solar panels and a trailer for his bike, he was ready to go.

His food would be cooked on a rocket stove made from two old catering tins, and he would wash in a solar shower essentially a black plastic bag suspended from a tree, and warmed by the sun.

His lavatory would be a hole in the ground screened by a wooden modesty structure to protect the sensibilities of any walkers using a nearby footpath.

Then, with his pockets empty -- he didn't even carry keys as he decided not to lock his caravan and start trusting the world a bit more -- Mark was ready to go.

Everything was about to change.

Even breakfast on the first day would be different, with morning coffee no longer an option, and the ingredients for his breakfast beverage now gathered in the hedges around his caravan.

"I drink nettle and cleaver tea, sometimes with some fresh lemon verbena when I find it," he says.

"It's all very good for you: iron, calcium, anti-oxidants. I also drink plantain tea for my hayfever, and that's everywhere, even the cracks in the path."

Could you live without spending money for a week? Do you think you could follow in Mark Boyles footsteps? Tell us your thoughts in the "Sound off" box at the bottom of the article.

Although it hasn't always been easy, and there have been many challenges and sacrifices, 18 months later, Mark is still living this way. He told CNN he has really loved it and never been happier or fitter.

"The first few months were hard, just finding my way," he admits. "If you think about how disruptive it is when you just move house or change a job, imagine changing everything at once. But after a couple of months it became very easy, I had all my routines worked out."

Mark's remarkable journey is relayed in his new book, "The Moneyless Man", which along with detailing the practical challenges on the rocky road towards his new world, also explains the philosophy that drives him that human society is fairer, happier and more secure when relationships are not mediated by money.

Any profits from the book will be invested in buying land to create a "Freeconomy community", where people can experiment living together without money.

Public interest in his project has been divided. While a huge number of people are very supportive, there has been harsh criticism of him, particularly on Internet forums.

"It's funny, if you don't have a massive plasma TV these days people think you are an extremist," he says.

"People tend to be either very positive about what I'm doing or very negative; I think it's about 70 percent/30 percent. But I try not to get too worked up about it; its early days and we live in a very money orientated world."

Of course not everyone can, or is ready to, live like Mark -- a point he is happy to concede. But he does believe people can live more like him, and be happier as a result.

"There's no one solution for everyone, and everyone has different needs," says Mark.

"It's about reducing your consumption however that is appropriate for you, and there are lots of small ways people can do that which will benefit themselves and the environment, like car sharing."

With this in mind he put the money from the sale of his houseboat towards setting up justfortheloveofit.org, a social networking Web site that aims to help reconnect people in their local communities through the simple act of sharing.

Essentially users sign up and offer skills, spaces and tools they have to others for free. When you need something, you just ask. It's a virtuous circle. So far the site boasts 17,882 members in 131 countries sharing 315,757 skills, 62,033 tools and 287 spaces.

"The thing with 'Just For The Love Of It' is it seems really genuine," Em Butler, who has signed up to the site, told CNN.

"With other similar projects like 'Freegle' and 'Freecycle' you know there are people on them waiting to scam you, who will take what you offer and sell it on. But with this its hard to see how that would happen it really is just for the love of it".

So far Mark's adventure without money has taught him a lot, and he has inspired many others along the way, but he remains philosophical about his success.

"I just get up each morning and try and say if it happens, it happens," he says.

"I'm just trying to take life as it comes and enjoy it along the way."