Men are bigger liars, according to British study 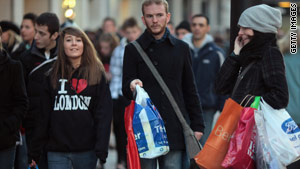 About 3,000 Britons ages 18 and older took the survey.
STORY HIGHLIGHTS

London, England (CNN) -- Men lie the most and feel less guilty about it -- but women are the better liars, a British survey has found.

The most common fib for men is denying that they've had too much to drink.

Both sexes direct most of the falsehoods at their poor moms.

A British man tells an average three lies daily or roughly 1,092 a year, the study by the Science Museum of London found.

Women, on the other hand, said they lie twice a day, which adds up to 728 a year.

"Lying may seem to be an unavoidable part of human nature but it's an important part of social interaction," said Katie Maggs, associate medical curator at the museum.

"The jury is still out as to whether human quirks like lying are the result of our genes, evolution or our upbringing."

Fifty-five percent of British people consider women better liars, according to the study.

More than two-thirds of people polled believe women are better at nailing someone telling lie.

When it comes to having a conscience, women are on the forefront, as well: Eighty-two percent say they feel guilty after telling a lie, compared with 70 percent of men.

Ralph Waldo Emerson said truth is beautiful, without doubt; but so are lies.

Turns out, he was on to something.