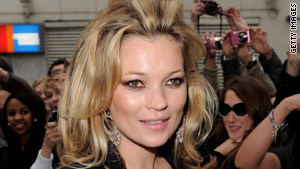 Kate Moss is known as much for her celebrity lifestyle as her modelling career.
STORY HIGHLIGHTS
RELATED TOPICS

London, England (CNN) -- Investigators in London have arrested a man in the reported theft of artworks from the home of supermodel Kate Moss, police said Friday.

Newspapers in Britain reported Friday that three works of art, including a portrait worth the equivalent of $115,000 (£80,000) were stolen Thursday from her London house while she was asleep upstairs.

Some outlets reported that the burglar stole a piece by elusive British street artist Banksy. He is famous for painting stenciled graffiti in public places, often overnight, before anyone realizes he's been there. His public art has appeared across London and Britain and his gallery paintings can reach into the six figures.

This week, London police appealed for more information about the theft this month of two Banksy prints worth more than the equivalent of $23,000 (£16,000) from an art gallery in central London's Soho neighborhood.

The prints, both limited-edition and signed by the artist, were stolen after thieves broke through the gallery's front window, police said.

When asked about the Moss reports, a spokesman for London's Metropolitan Police would only say that police were investigating a residential burglary Thursday in central London.

"A 24-year-old man has been arrested on suspicion of burglary and is in custody at a north London police station," a police spokesman said.

British police customarily do not release detailed information about investigations if someone has been arrested or charged.

A spokeswoman from Storm Models, which represents Moss, declined to comment.