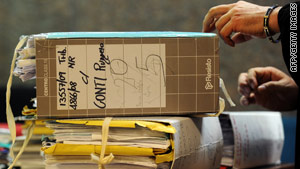 Files relating to the case against Rev. Ruggero Conti piled high in Rome's Palace of Justice on May 20, 2010.
STORY HIGHLIGHTS
RELATED TOPICS

Rome, Italy (CNN) -- An Italian bishop testified this week in the trial of a priest accused of child abuse, saying that although the accusations were "alarming," he did not stop the priest's contact with children.

Monsignor Gino Reali took the stand Thursday at Rome's Tribunal courthouse, which was packed with journalists and about 50 supporters of the priest, the Rev. Ruggero Conti.

Conti is accused of molesting seven boys at the Nativita di Santa Maria Santissima parish in Rome. He faces charges of committing sexual violence and prostitution.

Reali told the court he found the accusations against Conti "alarming" and decided to speak about it with 20 to 25 people, including two young alleged victims.

"I tried to get to the bottom of the rumors by talking to other priests, other religious people, and with other people who work at the parish," Reali testified. "I was told that some of Don Conti's actions could be interpreted the wrong way by malicious minds."

He said he gave "indications" to Conti "to take a larger spiritual role and to take on a more prudent behavior toward the children, and not to have boys sleeping at his home."

Two alleged victims have told police that Conti masturbated them and forced them to perform oral sex on him in his home, where he often invited them to dinner and to watch movies, according to court documents.

One alleged victim testified Thursday that boys would often sleep at Conti's house, and that the priest would ask one of the boys to sleep with him in his room. Matteo Marongiu, 24, told the court he didn't know what went on inside the room.

Reali testified he couldn't control what Conti was doing. "I tried to listen to him and to what those (who) were around him had to say," he said.

The bishop said he even established a diocesan tribunal to investigate Conti's actions based on a victim's account, but a hearing never took place because the victim backed down from testifying.

When Reali was asked by the civil lawyers representing some of the victims at the trial why he didn't stop Conti's contact with children, given the gravity of the accusations, Reali replied it was because he tried to get the facts and not just rely on rumors.

"There were so many rumors," he said. "So many of them arrive at a bishop's desk. I need certainty. I encouraged them (the victims) to hand in their accounts in writing."

Vatican guidelines regarding clerical abuse state the local diocese must investigate "every allegation of sexual abuse of a minor by a cleric," and that "if the allegation has a semblance of truth," it needs to be referred to the Vatican's Congregation for the Doctrine of the Faith so it can decide whether a canonical trial should be launched.

Reali testified he was aware of his obligation under the guidelines.

"Did you alert them?" asked Nino Marazzita, the attorney for some of the alleged victims.

"I did not inform them," Reali replied.

Reali said he met "informally" with a member of the Doctrine of the Faith panel after Conti was arrested in June 2008, but he did not elaborate on details of the meeting.

Marazzita urged the prosecutor to charge Reali with aiding and abetting the crime of pedophilia.

This is the first time such an indictment request has been against an Italian bishop in relation to the sexual abuse of a minor by a cleric, Marazzita told CNN.

The Catholic Church has been rocked this year by allegations of child abuse by Catholic clergy in Ireland, Germany, Austria, and Netherlands, following similar accusations in the United States in the past decade. A damning Irish-government-backed report last year said the Dublin Archdiocese had systematically covered up such allegations.

Pope Benedict XVI has repeatedly insisted the church will do everything in its power to prevent child abuse, but Conti's trial may undercut some of those assurances, especially since the alleged abuse of boys happened well after a child abuse scandal came to light in the United States.

Earlier at the hearing, Marongiu told the court Conti frequently made advances to him when he was 13 years old in all sorts of places, including in a car and during confession. He said it did not happen in the confessional booth, and that Conti would hear confession anywhere at any time.

"When he was driving, he would always put his hands in between my thighs," Marongiu said. "He would also kiss me. ... I knew what he was doing, but I agreed to let him do it because it was Don Ruggero, a person I esteemed and liked. ... I thought it was his way of being friendly and affectionate."

Asked by a civil lawyer if he considered those advances to be sexual molestation, Marongiu replied no, and that he thought it was consensual as long as it was a hand on his thighs.

He said he thought differently when it came to Conti kissing ears: "I didn't like feeling his tongue in my ears, so I would tell him to stop and he would."

Marongiu testified that he and his friends, though subjected to such advances, thought the world of Conti. They were 13 and 14 years old, he said, too young to understand what was happening.

He said he changed his mind about Conti when his cousin told him what the priest had done to him. Marongiu told the court he had no reason to doubt his cousin; he would not elaborate on what happened between his cousin and Conti except to say it was an act of molestation and he hoped Conti would get a life sentence for what he did.

At the end of the hearing, Conti's supporters chanted, "Viva Don Ruggero" outside the courtroom and some hugged and kissed him as police escorted him away.

One supporter told CNN she thought the alleged victims testifying at the trial "are mad ... simply mad" and their claims "cannot be true."

Another said she felt angry hearing one of them testify "because what they are saying is not true," and one woman said she thought the alleged victims were being manipulated by "anti-clerical forces."

A teenage boy told CNN outside the court that he often went to spend the night at Conti's house and nothing ever happened.

The next hearing in the case is scheduled for June 15. A verdict is expected at the beginning of next year.