Ferguson: A life in the spotlight 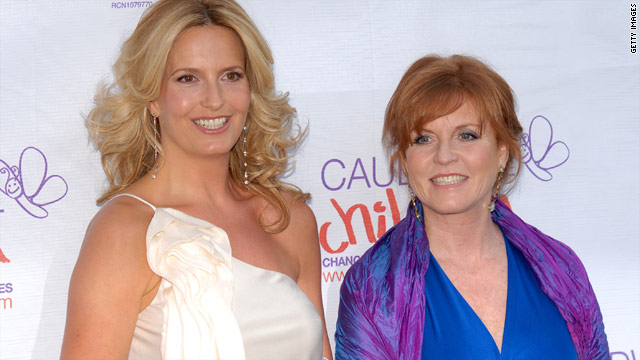 Born in London in October 1959 to parents Major Ronald Ferguson and Susan Mary Wright, Sarah Margaret Ferguson was acquainted with royalty early in her life due to her father's involvement in Prince Charles' polo team.

But in 1972 her parents were divorced and her mother remarried and moved to Argentina, while the teenage Sarah remained at boarding school in England.

She graduated from Queen's Secretarial College in London at 18, before going on to work for a public relations firm in the city.

In 1985, Sarah met Prince Andrew, the Duke of York, at a party at Windsor Castle on the outskirts of London. They were married the following year after a very public courtship. Prince Andrew, a handsome pilot in the Royal Navy, was something of a bon vivant and regular on the party circuit at the time, earning him nicknames in the tabloid press such as "The Playboy Prince" and "Randy Andy."

Gallery: Sarah Ferguson through the years

Their lavish wedding at Westminster Abbey in central London was followed two years later by the birth of their first child, Beatrice. Their second child, Eugenie, was born in 1990.

Ferguson, who became the Duchess of York, was popular at first with the British media because of her open and exuberant style. She enjoyed a strong rapport with the equally youthful Diana, Princess of Wales -- the two were frequently photographed together -- and many viewed them a more modern and approachable generation of royals.

Her seemingly fun approach was manna from heaven for the paparazzi, whether she was seen giggling at usually somber royal occasions, or clowning around for photographers during royal ski trips.

But with her husband frequently away in the navy, the duchess grew increasingly unhappy and struggled with the constant media attention. She threw herself into charity work and started work on a series of children's books.

Despite the relative success of her books, the newspaper headlines started to become negative, with reports that she was struggling financially due to her fondness for the jet-set lifestyle, in addition to less savory allegations about her relationship with male friends, most notably financial adviser John Bryan.

In 1992, photographs showing Bryan allegedly sucking on the duchess' toes were published in the British media. According to The Guardian newspaper, the Queen's former private secretary Lord Charteris summed her up as "vulgar, vulgar, vulgar." The scandal all but ended her marriage.

By 1995 the BBC reported that "Fergie," as she became known in the press, had fallen more than £4 million ($5.76 million) in debt. This prompted the Queen to take the unusual step of publicly closing her purse to her estranged daughter-in-law.

The following year the Duchess lost her title as her divorce from Prince Andrew became official.

Read more about the News of the World sting

However the success of her books and a host of other business ventures brought in some money. She became an ambassador for weight-loss company Weightwatchers and a spokesperson for china company Wedgwood.

She also set up the charitable Sarah Ferguson Foundation and produced a well-received film about the life of Queen Victoria, called "Young Victoria."

After her divorce the press criticism intensified and became more personal, focusing not only on her perceived extravagant lifestyle, but her weight with some UK tabloids calling her "The Duchess of Pork" as she piled on the pounds.

But Ferguson was never shy at hitting back at the criticism royal family members receive. In 2005, she told CNN that Prince Harry -- third in line to the British throne -- "deserves a break" after his apology for wearing a Nazi uniform to a costume party.

"The thing is that sometimes we all do things where the ramifications of our actions are perhaps afterthoughts," she told "American Morning."

Despite the controversies, Ferguson remains on very good terms with Prince Andrew -- even sharing their former marital home until 2004. "He's so amazing," she told The Guardian recently. "We're the happiest divorced couple in the world."