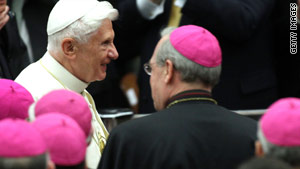 The women have urged the pope to revisit what they describe as a man-made law.
STORY HIGHLIGHTS
RELATED TOPICS

Rome, Italy (CNN) -- About a dozen Italian women have posted an open letter to the pope on the internet in which they claim to have had intimate relationships with priests and urge the church to abolish celibacy for Catholic clergy.

The letter was posted on an Italian online forum in March but was not picked up in the media until Global Post, an international news website, reported on it this week.

"The priest, like every human being, needs to live with his kindred, to experience feelings, to love and be loved, and also to conform deeply with another, something which he is hardly willing to do for fear of exposing himself to danger," the letter says.

The group calls celibacy a man-made law that needs revisiting and adapting to the times.

"We wonder if, like all man-made laws, at a certain time, in a certain historic time, it is not the case to discuss it again and change it or even, as we hope, completely abolish it."

Vatican spokesman Federico Lombardi had no comment on the matter Friday.

The letter was endorsed by about a dozen women, only three of whom signed their names. One of them is Stefania Salomone, 42, a single office manager who lives in Rome and said she had a close relationship with a priest for five years.

The relationship was not sexual but platonic, Salomone told CNN Friday. The two were in love, she said, but when the priest admitted his love, he ended their relationship.

Salomone said she was aware of the limits of the relationship when it began, but it was very painful to be "cast aside because of a sense of shame" felt by the priest.

She said she knows of about 40 women who were or are in special relationships with priests. Some are lovers, others "special friends," she said.

There are many more throughout Italy, Salomone said.

Of those 40, about a dozen of them endorsed the idea of the letter, and some even helped her write it, Salomone said. But only three were willing to have their names associated with it, she said.

Another one of the signatories to the letter is Antonella Carisio, who Salomone said had a sexual relationship with a Brazilian priest.

In another posting on the website on which the letter appears, Carisio talked about her affair with the priest, saying they spent a lot of time together and slept together at her house.

The women decided to write the letter after hearing the pope restate the church's position on celibacy in March, she said.

"We decided that it was (time) to make our reality known," Salomone told CNN. "We wanted to tell everybody that we exist and that we are no longer willing to always be silent about it."

The issue of priestly celibacy is not much debated in Italy, she said, but she said that's precisely the problem.

A priest is "just a man like everyone else. This is a good thing. And he should not be deprived of his right to a relationship."

Salomone said she has not heard from the Vatican about the letter and doesn't expect to. "I don't really care, to be honest. They are so preoccupied with other things at the moment. The important thing is to call attention to this problem."