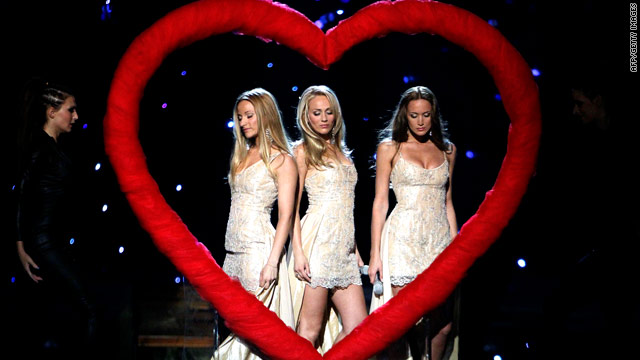 Feminnem from Croatia failed to qualify from the second semi-final at this year's Eurovision Song Contest.
STORY HIGHLIGHTS
RELATED TOPICS

(CNN) -- Like it or loathe it, musicians from 25 countries will shrug off the economic gloom shrouding Europe on Saturday, to perform in the Eurovision Song Contest -- the continent's biggest musical competition.

Since it began in Lugano, Switzerland in 1956, each participating European nation has put forward a singer or group to perform a specially-written song. Telephone votes as well as judges from each country then decide the winner.

This year, Sweden's entry, folk-singer Anna Bergendahl, was surprisingly eliminated at the semi-final stage despite her top pre-contest billing, while another favorite, girl group Feminnem from Croatia, also failed to make it through to the final 25.

According to Google, German singer Lena is predicted to win in Norway's capital based on search results. Its projection tool shows how popular each contestant is in each participating country and then calculates the scores they would get if the voting took place at that moment.

But the annual showpiece, watched by an estimated 120 million people across Europe, is staged at considerable expense by public broadcasters in each host nation.

Last's year's lavish event in Moscow, which featured a technologically elaborate stage design and legions of scantily-clad dancers, reportedly cost Russia's Channel One $43 million to stage, with the Russian government picking up much of the bill.

This year, Norway's NRK revealed it had spent $32 million on the three nights of competition -- which includes two semi-finals and a final -- but added that it could not afford to stage the event again if it successfully defended its title on Saturday.

The Netherlands had to step in to host the competition in 1980 after Israel, who hosted it the previous year, won again but chose not to participate after the Israeli Broadcasting Authority (IBA) said it could not fund another show.

According to the organizers, the rules stipulate that countries take part on the condition they are able to host the event.

But with the debt crisis in Greece threatening to engulf more countries around Europe, the Eurovision Song Contest is a luxury some countries can ill-afford. According to the organizers, Hungary, Andorra, the Czech Republic and Montenegro have all pulled out this year as their respective national broadcasters cut their budgets.

However, a spokesman for the European Broadcasting Union, which helps co-ordinate the event, denied the costs had become prohibitive.

"It's actually one of the most efficient TV shows to produce," he told CNN. "You get three very good concerts in one week broadcast across the world. So it doesn't cost that much."

He added that interest in the competition is as strong as ever across the continent, and that Hungary's national broadcaster has indicated its desire to participate again in the future.