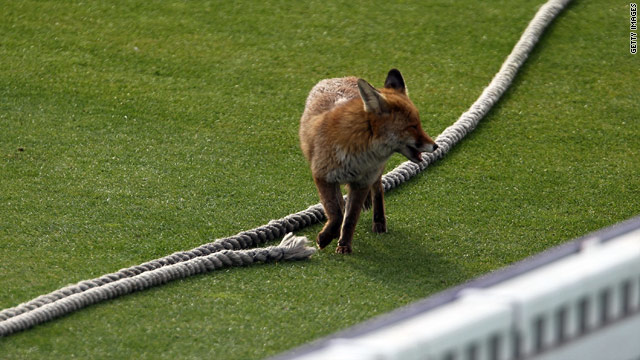 Foxes, like this one pictured at the Oval cricket ground, are a common sight in London.
STORY HIGHLIGHTS
RELATED TOPICS

London, England (CNN) -- Two nine-month-old twin girls were in a serious condition in hospital on Monday after being mauled by a fox as they slept in their London home, according to police.

The two girls were attacked in their upstairs bedroom at a house in Hackney, east London, after the fox apparently entered the house through a door left open because of the heat while the twins' parents watched television downstairs, police said.

"Officers and the London Ambulance Service attended and found two nine-month-old girls with injuries," a Metropolitan Police spokesman told CNN. "Both babies were taken to an east London hospital where their condition is described as serious but stable."

A fox caught in a trap placed at the rear of the property by local environmental officers was destroyed early on Monday, the spokesman said.

"On Sunday night a neighbor informed environmental health officers that an animal could be heard in one of the traps," he said.

"A vet was called to establish if it was safe to move the animal. It was determined it was not and the fox was humanely killed by the pest controller... The traps will remain in situ for the time being."

The twins, Lola and Isabella Koupparis, are being treated at London's Royal Free Hospital. The twins' four-year-old brother, who was also asleep upstairs, was not hurt, the UK's Press Association said.

The girls' mother, Pauline Koupparis, told the BBC she had gone to check on the twins after hearing "a funny cry, not a normal cry" from the bedroom.

"It was quite muffled but very pained. I went into the room and I saw some blood in Isabella's cot, I thought she had a nosebleed.

"I put on the light, I saw the fox, it just looked at me and it wasn't even scared of me. I started screaming as I realised Lola was also covered in blood."

Foxes are a common sight throughout London, especially in Hackney which backs onto the green spaces of Hackney Marshes, the Lea Valley Regional Park and the new Olympic site.

A neighbor of the family told PA: "We've all got foxes at the bottom of our gardens. Some people have got two or three living in their garden. They're all as bold as brass. You walk out into the garden and you have to shoo them away."

Of the twin girls, she said: "They're beautiful little babies, really beautiful."

Michael Parra, another neighbor, said police had warned residents not to leave doors open in the summer weather.

"We see a lot of foxes around here. They're always in our garden. Something should be done about them. I would love to get them out of here. They're really a nuisance and a danger. They've terrorized our garden."

A Hackney Council spokesman said the council didn't have dedicated environmental officers to deal with foxes but had called in a private contractor over the incident.

He said the council usually received "one or two phone calls a month" from people concerned about foxes going through their trash.

"We have never had reports in the past of foxes attacking residents," the spokesman told CNN. "All the expert advice we have had suggests that shocking incidents like this are incredibly rare, and our thoughts are with the children and their family."