Tensions high after days of ethnic clashes in Kyrgyzstan 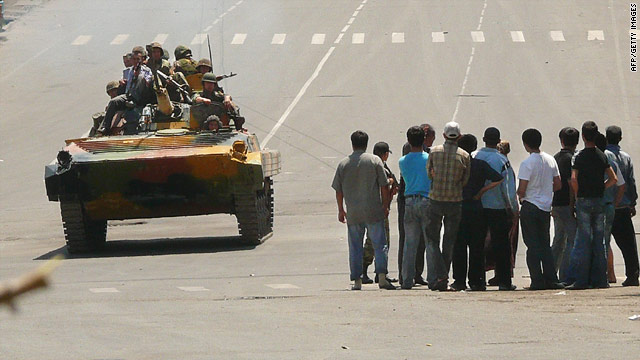 Kyrgyz soldiers on an armored vehicle drive past a group of people in Osh on June 11, 2010
STORY HIGHLIGHTS
RELATED TOPICS

Kyrgyzstan's interim government on Saturday worked to quell the upsurge of violence, imposing states of emergency in Osh, where fighting between ethnic Uzbek and Kyrgyz youths led to mass rioting, and in the city of Jalal-Abad in order to keep the unrest from spreading there, it said.

But the measures seemed to be doing little to calm the situation Sunday. Kyrgyz news agency 24.kg reported that as many as 5,000 youths were gathering in the center of Jalal-Abad early Sunday, demanding transportation to Osh. The news agency reported that the situation in the city "is very strained" with police patrolling the streets and special forces standing guard.

Kyrgyzstan is a country of 5.2 million people and strategically important in the region for gas lines. It is also the home to a Russian and U.S. military bases.

Official Russian TV network Russia Today reported that the interim government has given police permission to shoot to kill rioters on the streets.

The Kyrgyz news agency, citing health ministry officials, reported 77 dead in the latest unrest -- 71 killed in Osh and 6 in Jalal-Abad.

Amateur video obtained by CNN appears to show dozens of bloodied bodies lined up along a street in Osh as bystanders rush to cover them. The corpses all appear to be men, one appears to be charred.

Witnesses said the toll is more likely to be in the thousands.

The violence led Uzbekistan to close its border with Kyrgyzstan, according to the deputy chairman of the Kyrgyz border service, 24.kg reported.

But Russia Today reported that the border remained open for fleeing refugees and RIA-Novosti reported that more than 700 people crossed into Uzbekistan on Saturday.

Extra army and police units were dispatched and a 6 p.m.-to-6 a.m. curfew has been imposed in several districts of southern Kyrgyzstan until June 20, the government said.

The Kyrgyz interim leader, Roza Otunbayeva, has asked for Russian peacekeepers to help end the unrest, the result of interethnic tensions that have been brewing for weeks. The 24.kg agency reported that the provisional government of Kyrgyzstan "at an emergency meeting decided to declare a partial mobilization."

Otunbayeva, in quotes passed along by the interim government spokesman, said Saturday that the situation has gotten "out of control" and "we need outside military forces to solve the situation."

But President Dmitry Medvedev's spokeswoman said humanitarian aid and not troops are being rushed to the area at present, the Kremlin said.

"This is an internal conflict and Russia does not yet see the conditions for its participating in resolving it," spokeswoman Natalya Timakhova was quoted as saying by the Kremlin press service.

Timakhova said the president intends to evacuate the injured.

A Russian cargo plane carrying six injured Kyrgyz citizens landed in Moscow on Sunday, according to RIA-Novosti. The plane arrived in Bishkek on Saturday to deliver humanitarian aid, the news agency reported, adding that food and medical supply shortages are becoming an issue.

Otunbayeva on Saturday discussed the unrest in a phone call with Russian Prime Minister Vladimir Putin, and Moscow police have reinforced the security near the Kyrgyz and Uzbek embassies.

Rioters have set fire to a number of businesses and government buildings in Osh, and there was looting and widespread vandalism, Kyrgyz officials said.

The nation's top health official, Dinara Sagynbayeva, said on Friday about "half of those killed and injured have bullet wounds and the other half have injuries apparently made by some hard objects such as clubs, metal rods and rocks" in Osh, the country's second-largest city.

"The United States encourages American citizens in the Kyrgyz Republic to be in contact with the U.S. Embassy and be aware of the Embassy's warden messages to ensure their safety in these turbulent times," the statement said.