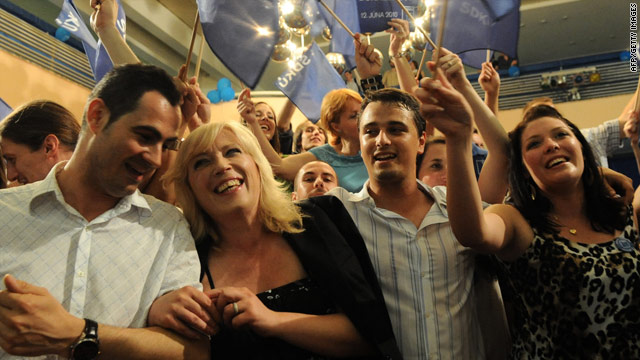 (CNN) -- Slovak voters have dumped their government, prompting one nationalist firebrand to warn that the country would now be run by "homosexuals and Hungarians," the Slovak news agency TASR reported Sunday.

Prime Minister Robert Fico's party actually increased its share of the vote and will have the largest number of seats in parliament by far, but will fall short of an overall majority.

A potential coalition of four center-right parties looks set to control 79 seats in the 150-seat legislature.

Former Prime Minister Mikulas Dzurinda's SKDU-DS party lost three seats, but Dzurinda could return to power because his party is the biggest of the four possible coalition parties.

Fico said he was willing to try to form or government or to lead the opposition, TASR reported.

Jan Slota, the firebrand leader of the Slovak National Party, was less sanguine about the results.

"Homosexuals and Hungarians will begin to rule in this state, so thank you very much," Slota said as exit polls showed his party losing power, according to TASR.

"I'm feeling like crying because of Slovaks. Let's wait for the (official) results ... you can see, I'm not broken, I'm only sad about Slovaks," said Slota, adding: "We'll all cry tears of blood."

An ethnic Hungarian party, Most-Hid, looks set to win 14 seats and be part of the new government.

Slovakia has a large ethnic Hungarian minority. The mountainous Central European country was part of the Austro-Hungarian Empire until World War I.

Slota's party has been in a governing coalition with Fico's Smer-SD and the nationalist party of another former prime minister, Vladimir Meciar, since 2006.

Meciar's party failed to secure at least 5 percent of votes Saturday, so they will not have any seats in the new parliament, TASR reported.