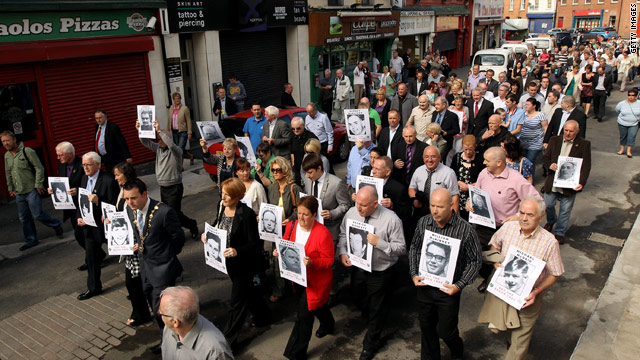 The 1972 shootings at a civil rights march in Londonderry hardened anti-British sentiments in Northern Ireland, according to analysts, and led to many fresh recruits to the Irish Republican Army. Three decades of violence followed, known as The Troubles, in which almost 3,000 people died.

There was some provocation by the Irish Republican Army in Derry on that day, but nothing that justified the shootings of civilians, the report found.

British paratroopers on that day had no reason to believe they were under threat from the victims, gave no warnings before firing, and lied to the far-reaching official inquiry into the seminal event, the inquiry concluded.

Only one casualty was associated with the IRA, and he was probably not posing a threat when he was shot fatally, the report found.

Members of the British Army fired more than 100 rounds in violation of orders issued to every British soldier serving in Northern Ireland at the time, the report found.

"Some members of our armed forces acted wrongly ... and for that, on behalf of the government, indeed on behalf of our country, I am deeply sorry," British Prime Minister David Cameron said after the release of the long-awaited report.

Why was Bloody Sunday so important?

The crowd in Londonderry that gathered to hear the verdict of the inquiry cheered when Cameron announced that the first shot was fired by British soldiers, and that none of the victims had been armed.

Tony Doherty, the son of one of the victims, told the crowd "the truth has been brought home at last."

"It can now be proclaimed to the world that the dead and the wounded of Bloody Sunday -- civil rights marchers, one and all -- were innocent, one and all, gunned down in their own streets by soldiers who'd been given to believe that they could kill with perfect impunity," he said.

Bloody Sunday has been considered by many as one of the greatest injustices of Northern Ireland's troubled history. Even the name of the city is disputed, with pro-Irish nationalists calling it Derry and pro-British unionists calling it Londonderry.

Tuesday's report found no indication the soldiers were firing at people they thought were posing a threat or that they missed, the report said.

"All the casualties were either the intended target of the soldiers or the result of shots fired indiscriminately," it states.

And the soldiers in Derry that day who were interviewed by the inquiry lied in their testimony, the report added.

"Many of these soldiers have knowingly put forward false accounts in order to seek to justify their firing," it said.

The truth has been brought home at last.
--Tony Doherty, son of one of the victims
RELATED TOPICS

Addressing the question of how high responsibility for the massacre should go, the report overwhelmingly placed it with the soldiers who were on the ground, along with their commander, who decided to launch the incursion. The report said there is no evidence that either the British or Northern Irish governments "intended, planned, or foresaw" the events of that day, or that either government tolerated or encouraged the use of "unjustified" lethal force.

Northern Ireland's Public Prosecution Service said it would review the report to determine whether any criminal case would be launched as a result.

"It is not practical, at this stage, to say when such decisions will be taken other than to indicate that the matter will be considered as expeditiously as possible," prosecutors said in a statement issued after the report.

Doherty and other victims' family members took to the stage in Derry and one by one declared their relatives officially innocent of any crime.

One of the relatives was Kate Nash, sister of William Nash, who the report found was not carrying any weapon that day. Their father, Alex, was wounded while tending to his son, who was killed.

"My brother William -- we know he was innocent. We've always known. Now, the world knows," she told the cheering crowd.

The investigation, which cost more than $280 million and heard from 2,500 witnesses, lasted more than a dozen years -- making it the longest-running such probe in British history.

The soldiers who opened fire on Bloody Sunday insisted they were threatened by people with weapons. That's what they told the first inquiry, which came out 11 weeks after Bloody Sunday, and they were largely cleared of wrongdoing.

But ever since, the truth about Bloody Sunday has been disputed. Relatives of the victims have long maintained their family members were innocent and were not armed.

Tony Blair announced the new investigation in 1998, less than a year after he became prime minister, saying the original government probe had been too hasty and that new evidence had come to light in the decades since the killings.

The aim was not to place blame, but to find the truth about what happened that day, Blair said.

Investigators heard from current and former members of the British military and paramilitary, forensic experts, journalists, priests and police. Some military witnesses gave their testimony anonymously.

The investigation was conducted by Mark Saville, a British law lord; William L. Hoyt, the former chief justice of New Brunswick, Canada; and John L. Toohey, a former justice of the High Court of Australia.

The findings raise the possibility of soldiers being prosecuted, which could reopen bitter divisions between Northern Ireland's largely Protestant unionists, who want to remain part of the United Kingdom, and largely Catholic republicans, who want to join the Republic of Ireland.

Northern Ireland now enjoys peace because the former enemies share political power -- the result of a deal brokered partly by Tony Blair himself.