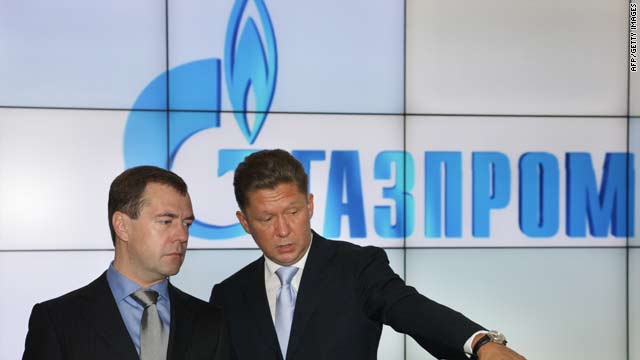 Miller said the cut, which began Monday, will be "gradual, daily and proportional to the volume of debt."

Belarus has refused to pay Russian gas rates of $169 per 1,000 cubic meters for the first quarter of the year and $185 for the second quarter, RIA-Novosti reported. The former Soviet republic has instead been paying $150 since Jan. 1, ringing up a large debt in the process.

Russia's action could hurt customers farther down the pipeline.

Belarus has said it will be technologically unable to ensure complete natural gas transit to Europe, if Russia cuts gas supplies to Belarus by 85 percent, state media reported.

In the past, other countries including Austria, Bulgaria, the Czech Republic, Germany, Romania, Greece and Turkey have complained that their gas supplies have been affected as Russia trimmed output to upstream customers like Belarus and Ukraine.

Gazprom is the world's biggest producer and exporter of natural gas -- and Russia's most powerful company.

It controls 20 percent of the world's natural gas reserves and operates the world's largest gas distribution network covering an area from Europe to the Far East, according to its website.

Formed in 1989 to replace the Soviet Ministry of the Gas Industry, Gazprom is closely tied to the Russian government, which owns a controlling 50 percent stake in the company. Medvedev is a former Gazprom chairman.

In recent years, an increasingly confident Moscow has used Gazprom to assert its authority over Russia's former sphere of influence by offering heavily subsidized gas to ex-Soviet countries.

Gazprom has switched off gas supplies to another former republic -- Ukraine -- several times in recent years in a row over payments and Kiev's rejection of proposals to hike rates. Those disputes ended earlier this year when Russia agreed to a 30 percent drop in the price of natural gas sold to Ukraine, in exchange for permission to extend Russia's lease of a major naval base in the Black Sea port of Sevastopol, Ukraine, for 25 years.