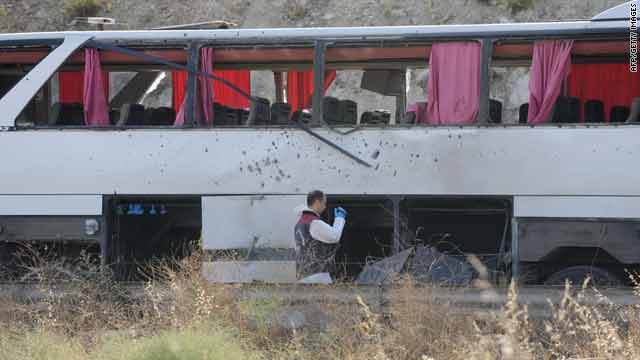 A man inspects the wreckage of a military bus after a roadside bombing, killing four people including a girl in Istanbul Tuesday.
STORY HIGHLIGHTS
RELATED TOPICS

Istanbul, Turkey (CNN) -- A remote-controlled roadside bomb ripped through a bus transporting Turkish military personnel and their families to a gendarmerie paramilitary base in Istanbul on Tuesday.

Turkish authorities say three gendarmerie sergeants and the 17-year-old daughter of a member of the security forces were killed in the attack.

A fourth wounded sergeant died in hospital hours after the bomb blast, an official at Istanbul's TEM Hospital told CNN, raising the death toll to five.

"It was a remote-controlled, fragmentation bomb that was left on the side of the road," said Huseyin Avni Mutlu, the governor of Istanbul, in a televised appearance broadcast live from the scene of the explosion. "This is a terrorist act."

The bomb attack took place in the western, European side of the city. Mutlu said the device hit the third and last of a three-bus convoy that was traveling to the Istanbul Province Gendarmerie Command Center.

The network also showed video of a man dressed in civilian clothes bleeding from the stomach, being loaded into an ambulance.

A splinter Kurdish nationalist group, the Kurdistan Freedom Falcons, claimed responsibility for the bombing in a statement posted on the internet.

"All military forces and groups, bureaucratic persons who have a role in this racist war against Kurdish people are our target," said the statement, which was released on the pro-Kurdish web-site, the Firat News Agency.

The Kurdistan Freedom Falcons are a splinter group from the Kurdistan Workers' Party, or PKK, a movement of Marxist Kurdish guerrillas who have been fighting against the Turkish state since the 1980s. Tuesday's deadly explosion comes at a time when the 26-year conflict between Turkish security forces and Kurdish PKK militants is once again flaring.

Last week, a top Turkish army general announced the PKK was increasing the frequency of its attacks. General Fahri Kir said the militants are trying to expand operations beyond south-eastern, predominantly Kurdish-populated Turkey. PKK militants are making no secret of their threats to widen the battlefield in Turkey.

"If the military operations and the political operations do not stop against the guerrillas and the Kurdish people, the actions of the PKK will spread to the cities as well," said PKK spokesman Roj Welat, in a telephone call to CNN from northern Iraq.

The PKK has been battling the Turkish government since the early 1980s. Initially, the movement fought to carve out a separate homeland for Turkey's ethnic Kurdish minority, which makes up nearly 18 percent of the Turkish population, according to the CIA World Factbook.

More then 30,000 people, mostly ethnic Kurds, have been killed during the conflict. In recent years, the rebels say they have given up their demands for an independent Kurdish state, and are instead fighting for more linguistic and cultural freedoms.

Though the Kurds represent Turkey's largest ethnic minority, their language has historically been suppressed by the Turkish state, which long referred to Kurds as "mountain Turks."

Twelve Turkish troops were killed in eastern Turkey last weekend during clashes with rebels along the border with Iraq. According to the Turkish military, at least 55 Turkish security forces have been killed in fighting with the PKK since the beginning of March.

Turkish authorities said they were investigating links between Tuesday's roadside bomb and a similar, less deadly bombing that targeted a police bus in the same Halkali district of Istanbul on June 8. Fifteen police officers were injured in that attack.

When asked about the previous police bus blast, Istanbul Police Chief Huseyin Capkin said there may be a connection. He added that authorities were investigating the possible link.