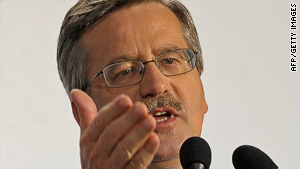 President Lech Kaczynski was killed in a plane crash in April.

Sunday's vote was a runoff ballot, demanded by Polish law when an earlier round of voting failed to give either candidate more than 50 percent of the vote.

Both candidates addressed supporters in televised speeches from their campaign headquarters.

Video: The state of Poland's economy

Kaczynski congratulated his rival on exit poll results, but did not concede victory.

Komorowski said, "I congratulate Poland and I thank you from the bottom of my heart for turning out to vote in such large numbers."

The president in Poland is primarily a ceremonial figure, but he has the power to veto laws, and thus helps shape politics.

Jaroslaw Kaczynski, once prime minister, is a divisive figure in Polish politics. His far-right Law and Justice party is running on a nationalist platform with the slogan, "Poland comes first."

"We have been on this road for 21 years together, and we have been right," Komorowski said on the campaign trail. "We have been moving toward democracy and navigating our way in a free economy."

The president, his wife and more than 90 others were killed April 10 in western Russia on their way to a service commemorating the 70th anniversary of the Russian massacre of Polish prisoners of war in the village of Katyn.