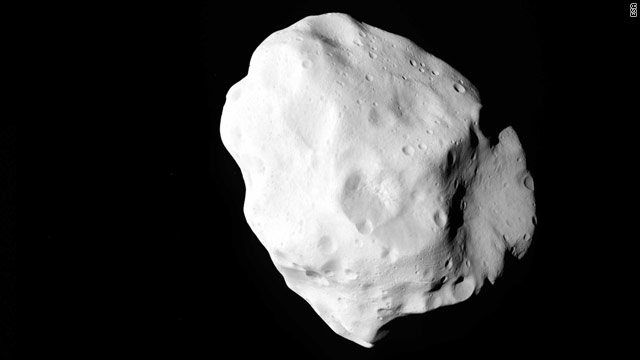 Detailed images of the asteroid Lutetia were sent back to Earth on Saturday by the European Space Agency's Rosetta probe.
STORY HIGHLIGHTS
RELATED TOPICS

(CNN) -- A European space probe headed toward its next target Sunday after sending back detailed images of an asteroid that scientists hope will increase understanding of how the solar system evolved.

Pictures of the asteroid Lutetia from the Rosetta probe's deep space fly-by Saturday are some of the most detailed ever taken, the European Space Agency said.

The images, taken while the probe raced by at 15 kilometers (9 miles) per second, show a deeply pockmarked, irregular rock -- possibly left over from the birth of the solar system.

Holger Sierks with the Max Planck Institute for Solar System Research described the asteroid as "a very old object" in a statement Saturday.

"Tonight we have seen a remnant of the solar system's creation," he said.

The surface of the asteroid, shaped like a big potato, has deep craters covering its 130-kilometer length.

The probe spent several hours shooting images of the irregular shaped space rock, circling more than 450 million km (280 million miles) out from the sun. The space agency says its OSIRIS camera was able to capture detail down to just a few dozen meters.

The next stop for the Rosetta spacecraft -- named for the stone that helped decipher Egyptian hieroglyphics -- is comet Churyumov-Gerasimenko.

If all goes according to plan, the probe will intercept the comet in 2014.

The two will travel in tandem for several months as the comet hurtles from near Jupiter's orbit toward the Sun, with Rosetta finally touching down on the surface to take samples.