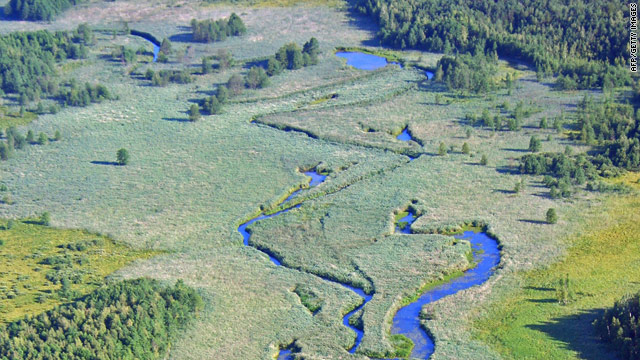 Augustow, Poland (CNN) -- It is not without pride that Malgorzata Gorska climbs an unfinished highway bridge near the town of Augustow in Eastern Poland.

"This is the road to nowhere," she says, pointing to the sand foundation for a road that ends at the entrance to the large forest.

This is all that indicates that the Polish government was going to build a highway right through this area, the Via Baltyka road project that was supposed to connect this part of Poland with ports on the Baltic Coast.

"This section of the road was planned to enter the protected area," Gorska says.

Malgorzata Gorska, a conservationist with the Polish Society for the Protection of Birds, spearheaded a coalition of environmentalists to stop the highway that was due to cut through the Rospuda Valley, one of the last pieces of untouched forest in Europe.

The valley with its wetlands is home to endangered species including lynx, dozens of bird species, elk, otters and beavers. Scientists say it is a sensitive and complex ecosystem that would have been badly disturbed by the highway.

Video: Keeping up with 'green' standards

The Polish government gave the go-ahead to build the highway in the 1990s. As Malgorzata Gorksa walks through the forest, she points out red dots that have been spray painted on many of the trees.

Malgorzata Gorska, several scientists and environmental groups took up the fight to block the project. They gathered scientific evidence detailing the impact the highway would have on the environment.

They protested as heavy equipment was moved into the area to cut down trees to make room for the road. And they petitioned the European Union and filed suits in Polish courts, contending that the highway would violate European environmental laws.

The battle that began in 2002 lasted for almost seven years until finally, in 2009 after the Polish courts ruled against the project, the Polish government announced the highway would take an alternate route, bypassing the protected areas.

Stopping the road was seen as one of the first major victories for conservationists in post-communist Poland and it won Malgorzata Gorska a prestigious Goldman Environmental Prize.

But she remains a controversial figure in the community because many people in nearby communities say the highway is needed.

Trucks clog the roads in places like Augustow, just a few miles from where the highway was supposed to be. The heavy 18-wheelers go straight through the little town because there is no highway to bypass urban areas.

"We have had enough, there are so many accidents here, my friend was killed on the corner over there," one woman in Augustow said, pointing to a busy intersection. "We just don't know what to do anymore."

Malgorzata Gorska says she understands the criticism. "I absolutely agree that Augustow city needs the bypass as soon as possible. But they were told the only way to have the bypass is to damage the protected area. And it is not right."

Malgorzata Gorska says she will continue her fight against any other construction projects that would endanger the environment in this part of Poland.