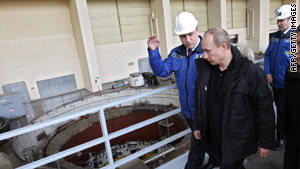 The attackers targeted the Baksan Hydropower Plant in the North Caucasus republic of Kabardino-Balkaria, the Investigative Committee of the Russian Prosecutor's Office said.

"At about 4 a.m., perpetrators wearing masks penetrated inside the station and tied their hands with tape," Valery Shogenov, the hydroelectric station's manager, told Russian state television on the backdrop of his plant still smoking.

"But the operators managed to finally free themselves from the tape and call us about the accident," he said.

While at the station, the gunmen triggered off four improvised explosive devices that destroyed two of its three hydropower generators and caused a fire in the control room.

Later, investigators defused a fifth device planted by the bombers that didn't explode.

Russian security officials said the same gunmen had attacked a local police station in Baksan vullage with grenade launchers shortly before storming into the power plant.

"The possible suspects have been determined now," the Russian National Antiterrorist Committee said in a statement. "Government bodies are keeping the situation under their control," it said.

The special crisis center of the republic's law enforcement agencies said three to five people were behind the attack.

RusHydro, the country's power-generating company, said on its website that the fire had been extinguished, but part of the control room's equipment is damaged and needs replacement.

RusHydro also said security has been boosted at all its hydroelectric plants across Russia's restive northern Caucasus region.

The Baksan hydroelectric plant was built in 1936.

Russian media said this was the first time in the country's history that a power plant was attacked by terrorists.