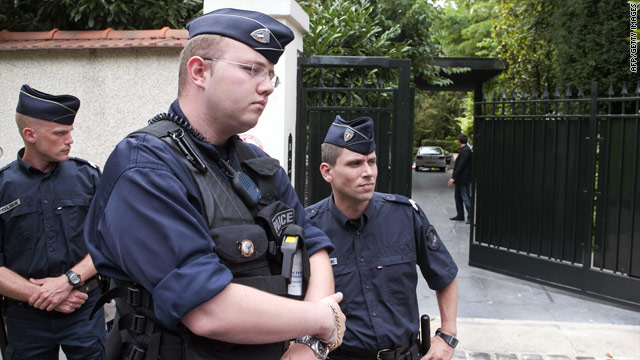 Paris, France (CNN) -- French police are searching the home of the daughter of L'Oreal heiress Liliane Bettencourt, a spokeswoman from the prosecutor's office in the Paris suburb of Nanterre told CNN Wednesday.

Bettencourt's daughter, Francoise Bettencourt-Meyers, went to court last month accusing a photographer of bilking her mother out of a billion euros.

Bettencourt, who is France's richest woman, allegedly gave the money to the photographer, but her daughter says she is not mentally competent to handle her own affairs.

It was unclear whether the search at her daughter's home and the questioning of Liliane Bettencourt were related, or to what case the search was tied.

Woerth and Sarkozy have both denied the allegations, which resulted from secret recordings that surfaced last month. The recordings, allegedly made by Bettencourt's butler, also refer to a bank account in Switzerland containing 80 million euros ($98.3 million), which had not been reported on Bettencourt's taxes.

Woerth will be questioned by police at some point, a spokeswoman for the prosecutor's office said last week. No date for that has been set.

Bettencourt's former bookkeeper, Claire Thibout, elaborated on the allegations in an interview this month with a French investigative website.

She said she prepared envelopes of cash that were to be given to Sarkozy and Woerth, who previously worked in the Budget Ministry and was in charge of reforms to France's retirement system.

Thibout's lawyer told French news agency Agence France-Presse this month that de Maistre once asked his client for 150,000 euros ($188,800) and said he would give it "discreetly" to Woerth at a dinner.

Thibout testified before a judge about the allegations earlier in July.

The French newspaper Le Monde published her testimony, in which she repeated her allegations against de Maistre and said she regularly withdrew large sums of money at his request.

Among other claims is that Sarkozy's 2007 presidential campaign received money from Bettencourt in excess of campaign finance limits.