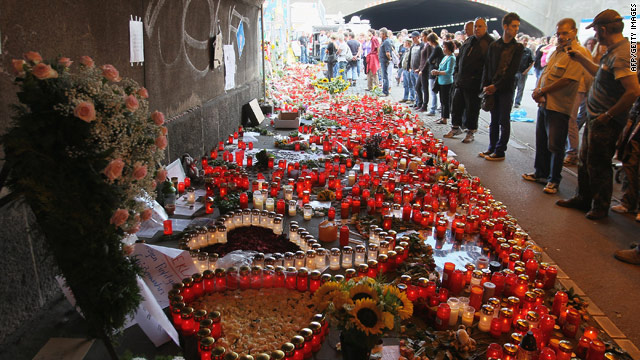 Mourners gather on Tuesday at the German underpass where dozens of people were crushed.
STORY HIGHLIGHTS
RELATED TOPICS

(CNN) -- A 25-year-old woman who was injured in last week's stampede at the Love Parade music festival in Duisburg, Germany, died Wednesday, bringing the death toll to 21, prosecutors there said.

The deadly crush happened Saturday in an underpass between the main event site and an expansion area.

Witnesses told CNN affiliate NTV that people pushed into the tunnel from both sides until it was dangerously overcrowded. The panic began when people began to lose consciousness as they were crushed against the walls and each other.

The Duisburg public prosecutor's office said 511 were injured. Of these, 283 people had to be treated in hospitals, and all but 43 have been released.

German Chancellor Angela Merkel has called for a thorough investigation into the incident and said that she was "horrified and saddened" by the tragedy.

Carsten Lueb of NTV said some 1.4 million people showed up at the popular Love Parade festival, which featured dozens of DJs spinning techno music for hours.

Organizers expected only 700,000 to 800,000 attendees, so to accommodate more people they opened an additional event site. The numbers are disputed by police, who say the area can hold between 250,000 and 350,000 and at no time was it filled to capacity.

Witnesses told NTV that police were warned at least an hour before the incident that the underpass was becoming dangerously crowded. An additional entryway had been opened before the accident to relieve some of the pressure.

Police are investigating how the back-up came to occur in the underpass.