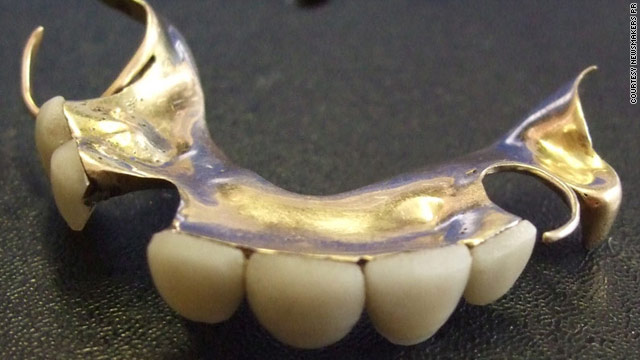 Churchill's dental technician said he could tell how the war was going by the distance the British PM hurled his teeth.
STORY HIGHLIGHTS
RELATED TOPICS

London, England (CNN) -- A pair of false teeth worn by Winston Churchill have sold at auction for more than $23,000 -- on the same day that plans were announced to put the British wartime leader's archive papers online for the first time.

Churchill, famous for his rousing speeches during World War II, had several sets of the partial upper dentures specially constructed to hide his natural lisp and accentuate his signature slurred diction.

According to documents held by the Royal College of Surgeons, the former prime minister "lived in fear of losing his false teeth" and would always have a spare set to hand, entrusted to his private secretary, Andrew Bullock of Keys auction house in Aylsham, eastern England, told CNN.

The set which sold for £15,200 ($23,700) on Thursday -- more than three times its expected price -- was put up for sale by Nigel Cudlipp, the son of the dental technician who made them, Derek Cudlipp.

"According to Nigel Cudlipp, his father said he could always tell how the war was going from the distance Winston hurled the teeth," said Bullock. "They were prone to breaking, especially when Churchill got a bit angry."

Bullock said Churchill suffered from poor teeth and gums from childhood and had complicated dentistry requirements. He later nominated his dentist for a knighthood.

The auction of memorabilia took place as details of plans to make one million pages of Churchill-themed archive material -- described by Churchill biographer Martin Gilbert as an "Aladdin's Cave of historical riches" -- available on the Web for the first time from 2012.

The Churchill Archives Centre, at Churchill College, Cambridge, is open to the public, but archive director Allen Packwood said the online resource -- a collaboration between Bloomsbury Publishing, the Sir Winston Churchill Archive Trust and Churchill Heritage Ltd. -- would take the collection into homes and classrooms.

Appropriately, Packwood told CNN, the collection includes letters from Churchill to his dentist, Eric Fish, including one written in 1936 complaining that his ill-fitting dentures were affecting his sense of taste.

"It is just amazing," Packwood said of the auction. "It does just show the huge continued interest in the man, and the great thing about what we are doing is that once this material is online it will be available to everyone to search through."

The collection also includes correspondence between Churchill and three American presidents; Franklin Roosevelt, Harry Truman and Dwight Eisenhower; and state papers, private letters and photos dating from his 19th-century school days until his death in 1965.

"What this archive does is strip away layers of hindsight and it actually reveals how little the people of the time knew about what was going on around them," said Packwood.

"One very good example is a wonderful letter from President Truman to Churchill within a couple of years of the end of the Second World War.

"Truman says to Churchill, 'I'm having trouble with our Russian friends. Then I remember Hitler. He had no heart at all. I believe Joe Stalin has one but the Politburo won't let him use it.' It shows you how little the American president or even Winston Churchill really understood about what was going on in Russia at the time."

Publisher Frances Pinter, of Bloomsbury Academic, said putting the archive online was a "fantastic opportunity." She said access to the archive would be modestly priced to attract the widest possible readership.

"It will have an impact on education, research and our understanding of 20th century history for a long time to come," Pinter told CNN.

"The thing that we are looking forward to is all the things that people haven't thought of doing with the archive yet. For example, you can see school children in America or England doing collaborative research projects or having competitions to see what they can find, which wouldn't have been conceivable before."

Meanwhile, auctioneer Bullock said the market for Churchill memorabilia showed no sign of exhaustion. In the last two years, Keys has sold a silver butter dish used by Churchill as an ashtray and a half-smoked cigar for more than $6,200 each.

"We have sold a lot of Churchill items recently," he said. "But I have never, or ever will, handle something which has had so much interest or publicity. It's been absolutely incredible."