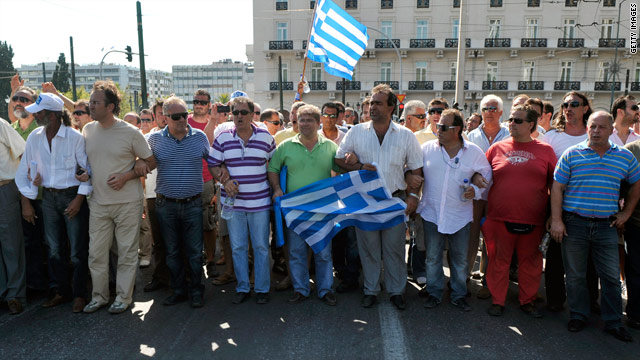 Truck drivers holding Greek flags march to the Greek Parliament on Friday in Athens. They said they would maintain a strike that has caused severe fuel shortages across the country.
STORY HIGHLIGHTS
RELATED TOPICS

Athens, Greece (CNN) -- Greek truck owners on Sunday voted to end a strike that had starved the country of fuel and dealt a severe blow to the tourist industry, according to state-run news agency ANA.

Greece's 33,000 licensed truck drivers went on strike this week to protest government plans to open up their industry and issue new licenses.

The vote to end the strike was carried by a narrow majority during the truckers' general meeting and not before serious problems had been caused to the supply of goods to markets throughout Greece.

The strike began July 26 after the government unveiled a draft bill that opens up the road freight market that is currently only open to government-licensed "public use" vehicles. The last truck licenses in the country were issued by the government in the 1970s, and there has since developed an informal market in truck licenses.

The strike sparked tension in the Greek capital, where striking workers threw rocks and plastic bottles at the gates of the transport ministry Thursday, and police used tear gas to disperse the angry crowd.

On Friday, the government said the truckers' refusal to comply with the order was "a grievous insult to law and order that harms society as a whole," the news agency reported.